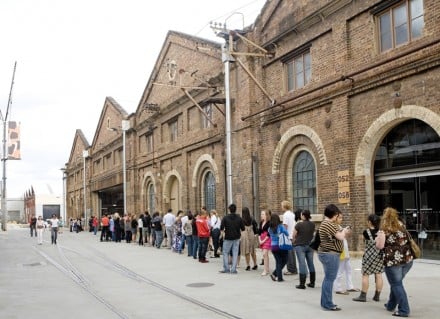 The Create NSW infrastructure support program is a key integrated component of the Government’s program of support to the arts.

Create NSW manages nine properties in and around the Sydney CBD. These have effectively developed as arts and cultural hubs through the clustering of like arts organisations as tenants. Thirty-four arts organisations are supported in subsidised accommodation.

The creation of such hubs or precincts brings benefits to the State. These include contributing to the visitor economy and the broader economy (eg. Walsh Bay as a destination for businesses, tourists and arts consumers) to urban renewal and social cohesion (eg. the Carriageworks facility at North Eveleigh), and to the viability of arts and cultural organisations.

Most of the properties controlled by Create NSW are significant heritage buildings which are owned by other Government agencies and have been made available under the terms of long-term leases for arts and cultural uses. Create NSW has maintained and/or developed these properties, largely as “public facing” venues and facilities such as theatres, galleries, rehearsal studios and creative spaces.

Create NSW intends to enter into direct negotiations with the National Art School to sublease the Former Darlinghurst Gaol site.

The Create NSW Infrastructure Support Policy guides the operation and management of the infrastructure support program.

Expressions of Interest are opening for vacant workshop spaces at One Canal Road, Leichhardt. Eight (8) workshop spaces are available for eligible arts and cultural organisations or businesses. Guidelines The […]More

One Canal Road, Leichhardt is located in the vibrant Inner West LGA arts and cultural zone, situated only 10 minutes from Sydney CBD and 40 minutes from the airport. The […]More

One Canal Road, Leichhardt is home to a large concentration of businesses dedicated to serving the NSW film and television industry, as well as the theatre and arts sectors. The […]More

Expressions of Interest are opening for two office spaces within the Arts Exchange building at The Rocks. Two (2) office spaces are available for eligible arts and cultural organisations. Guidelines […]More

The NSW Government is proud to be re-opening the Theatre Royal, in partnership with Dexus, which has commenced construction on a $170 million redevelopment to rejuvenate the retail, dining and […]More

Expressions of Interest (EOI) for the Parachute Ground, Lilyfield Storage Space are open. Guidelines The information on this page is a guide only. Before you apply, please read the relevant […]More

The rejuvenation of the Walsh Bay Arts Precinct into a fresh cultural and creative hub is a priority infrastructure project for the NSW Government.More

Sydney Theatre is a state of the art facility located at Walsh Bay and acts as a home for the best Australian and international performing arts.More

The Parachute Ground at Lilyfield provides affordable office and rehearsal space for creative organisations and practitioners.More

The Gunnery is an historic building on Sydney Harbour in Woolloomooloo, close to the Art Gallery of NSW, the Museum of Contemporary Art, and the galleries and colleges of East Sydney and Paddington. More

Garry Owen House is located in the Callan Park complex on Balmain Road in Rozelle. This facility is managed by the Writing NSW on behalf of Create NSW.More