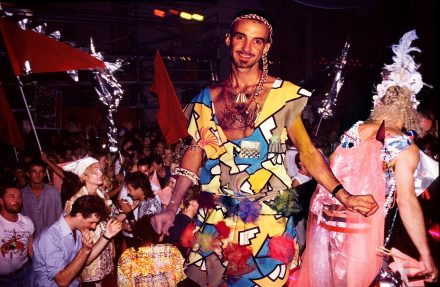 We spoke to photography legend – William Yang – whose stories of Sydney’s secret history of queer underground parties takes you back to an era when the dance party craze and the HIV pandemic were feeding each other.

Performance Space has commissioned you to create a new piece for Liveworks, drawing on your vast collection of images of Sydney’s queer underground party scene, spanning more than thirty years. What motivated you to capture these times?

When I first started taking photos, I was freelance – I would do anything people would pay me money to do. I started out with actors, with photos for their portfolios. But then started to take photos at parties, they were a good reflection of the social times. And then followed social pages for the glossy magazines, and the not so glossy magazines. It helped me pay the rent in the late seventies and eighties and build up a large collection of images.

I’ve always photographed gay events, though there was not much of a market for such photos at the time. And I think I was quite good at social photography! Because I took the photos fast; I didn’t make it a laboured process. I looked for situations where I could step in, capture a moment in time and then disappear.

What story do you believe your images tell?

There was a party era in Sydney – from 1986-1992; a dance party craze took over Sydney, particularly the Rat parties. I photographed nearly all the Rat parties and have a vast collection of negatives. I have never shown these photos before. At that time they didn’t really fit into the main story of artistic celebrities my photos were telling – the story of Brett Whitely, the story of Jenny Kee and so on.

The party photos had been gathering dust and it’s been good to revisit them and be able to view them again with a fresh eye. Things have changed. The same sort of parties just aren’t held anymore.

The images, of course, tell their own individual stories. But this has been a difficult project to produce because it needs its own narrative. You just can’t expect photos of people dancing to engage an audience. I have had to invent and sketch in a story and I have done this through images of some of the leading characters of the times Peter Tully, David McDiarmid, Jac Vidgen, Billy Yip. These people contributed to the production of the parties, producing unique art installations and lighting shows.

The collection for the show mainly concentrates on the Rat parties and the big Sleaze Balls. But there are images also of the many other parties that evolved during this phenomenal time.

What do they tell of you the man and you the artist?

I am a theatrical man and the photos present my view of things. I was particularly interested in the shows and performances at the parties. Groups performed that I had never seen before. Some of them making amazing costumes. I found these kinds of performances really interesting because they had no life outside of the party circuit. In a way, the parties provided the stage for people to engage in amateur theatrics.

Through your monologue, through your overlay of music, what experience do you seek for your audience?

The piece is both an entertainment and a social history. My work is in the documentary tradition, it’s a document of a social history. The music supplies emotion, which helps to make it entertaining. And the photos are really good. There is a big visual art component to it. People having a good time is a layer of it. But there is also the darker layer of drugs associated with these parties. There were casualties along the way.

It is very much a story of my times, but it will offer a nostalgic journey for others also. I don’t spell out all the layers of the story, I let the photos do that. The dance party craze and the HIV pandemic were happening at the same time. They were feeding into each other. There was a kind of abandonment in the parties and a defiance of the spectre of death around us all. And the gay community was under attack by people who wanted to destroy the community.

I will address these kinds of issues in my monologue.

How will your images and performance connect with individuals in your audience?

These were amazing times. It’s worth revisiting the seventies and the eighties because young people today have no idea what it was like then. Even I can’t believe it, except I have the photos to prove it.