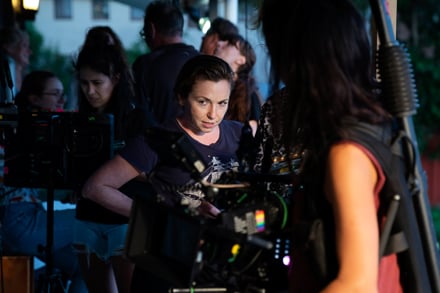 Anthea Williams behind the scenes of Safety Net. Photo by Kelly Gardner.

With the goal of having her work reach a broader audience, theatre director Anthea Williams has turned her attention to directing for the screen with her film Safety Net which will have its premiere at the 67th Sydney Film Festival as part of Screen NSW’s Screenability shorts program.

How does it feel to be part of the first film festival to go world-wide with the digital initiative We are One: A Global Film Festival?

You are an accomplished theatre director. However, after having taken part in several Screen NSW initiatives, including SheDirects, you started branching out into directing screen content. What made you decide to make the transition into screen directing?

A couple of years ago I directed Kill the Messenger, Nakkiah Lui’s first mainstage show. I was proud of the show and so sad as the production finished its run. We had wonderful reviews with full houses, and Nakkiah was remarkable, articulate, and brave. Yet even at capacity only 350 people could see the work each night. I needed to work in a medium that could reach a broader audience.

What did you enjoy about directing Safety Net and what did you learn from the experience?

I learnt a huge amount. Setups are slow, editing is wonderful, and you can fit a lot of people into a motel room (pre-COVID). In theatre you must rehearse a scene until a cast can find each moment every night for weeks. In film you can capture a moment of brilliance forever. That’s so freeing.

How did you hear about the story of Safety Net, written by Julian Larnach, and why did you think it was a story for screen?

Julian and I work together a lot. I read everything he writes. He heard a story like this through a friend of his who is a primary school teacher. Through that, he found a whole world.

When I read his first draft of Safety Net, Terry wasn’t a kid who lived with disability. If I’m honest it reminded me of myself as a child – so full of coping strategies, and so determined to have every experience they wanted – even if it hurt a little or a lot. And using humour to cover it all. I suggested to Julian that we work with an actor with disability and he immediately understood why I wanted to make that change. I think that’s why we’re a good creative pairing. We approach our work in very different ways but have similar ideals and preoccupations.

Tell us about casting newcomer William Best as your lead and what was it like working with him?

How has your experience as a busy and accomplished theatre director informed being a director for film?

I’m very used to walking into a room and 20 people asking me questions. Everything from the specificities of a line of dialogue, to lighting needs, and nail polish colour. I’m used to dealing with that and not losing my creativity, or vision, while dealing with the needs of various departments.

Working with designers and using image to create meaning and mood were things that I was used to as well, and of course, I love working with text.

I leaned very heavily on my brilliant Director of Photography, Tania Lambert. I’d never produced a shot-list and had to do some quick study on lenses, but we had wonderful conversations about feeling, eyeline, and change.

I found the editing process with Chris Plummer bloody wonderful. It’s great what you can do with a look or a glance.

Thirteen-year-old Terry is in emergency care with guardians after his mother’s arrest. Cheeky and living with a disability, he’s able to outwit one guardian while finding exactly the connection he needs with the other.

Image: Anthea Williams behind the scenes of Safety Net. Photo by Kelly Gardner.