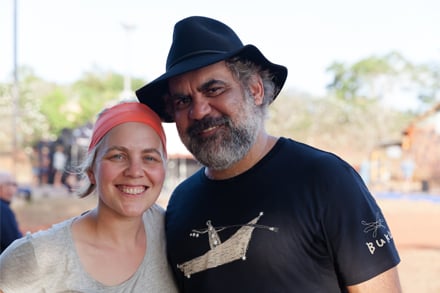 Filmmakers Nel Minchin and Wayne Blair have collaborated to tell the story of the iconic Bangarra Dance Theatre in their award-winning feature documentary Firestarter – The Story of Bangarra. This historically important film takes the viewer through Bangarra’s birth and spectacular growth to where we are today, four decades on. We spoke to the co-director and co-writers about the experience of working together and what surprised them most about Bangarra.

You co-directed Firestarter The Story of Bangarra together. Tell us about how this collaboration came about.

WB: Nel asked if I was interested in co-directing as well as co-writing, as this would be useful [to the production] as Bangarra move around a great deal, and two bodies are better than one. Nel also has more experience in documentaries and I wanted to learn.

NM: It was a highly collaborative process throughout. Necessary logistically as both Wayne and I had other commitments throughout the three-year filmmaking period and had times where we were able to pick up [the production] for each other. More pertinently, we brought different elements to the filmmaking process.

Tell us about the archival footage with interviews with the Page brothers, choreographer and artistic director Stephen Page AO (the storyteller), composer David Page (the Song Man), and Russell Page (the Dancer).

NM: We included historical interviews as well as present day interviews, so the audience would be able to watch them grow over the 30 years and know them intimately. It is quite incredible to have so much documentation of our key characters.

WB: Stephen has been artistic director on Bangarra for 29 its years so [using archival footage] felt like the right fit, the right way to tell this story.

Did you learn anything unexpected about Bangarra Dance Theatre while you were making the film?

WB: That these people tour a lot! They tour a great proportion of the year, and all to educate, inform, and share culture.

NM: As Nick Meyers, one of our two editors, said “they’re like Forrest Gump!”

Bangarra happened to be at all these key moments in recent Australian history – and [we] managed to film a whole bunch of it too! We were overwhelmed with the personal footage we uncovered that really represented an epic national story.

We understand that Stephen Page AO, Bangarra Dance Theatre’s Artistic Director and co-founder, has seen the final version. What was his reaction?

WB: I think the first time he was overwhelmed, because so many parts of his artistic life were up on screen. I cannot imagine what that would be like.

What was it like to work with editors Nick Myers and Karen Johnson?

WB: Both editors, Karen Johnson and Nick Meyers were unreal to work with.

NM: Karen did a wonderful job of wading through hours and hours of archival material and finding the incredible story within it. Nick is a fabulous visual artist with great creative ideas. Having both of them onboard has given us an opportunity to explore an important personal story in a structurally and visually exciting way.

What do you hope the audience will take away from the film and what are your plans for distribution?

WB: I want them to take away that this company represents all of us in Australia.

NM: Hopefully this is a film that travels overseas as it’s an important social and artistic Australian story. I’d like prospective audiences to know that although dance is key, this film is about a whole lot more than dance. It is about family, politics, race, and history. As one of the key characters David Page, says “using our artform as our weapons, we have to fight”.

Supported by Screen NSW, Firestarter – The Story of Bangarra, will screen as part of the Sydney Festival program at the State Theatre running 15 – 17. The full Sydney Film Festival: Summer Season program can be found online at sff.org.au. The film is also planned for a wider theatrical release through Icon Film Distribution for February 2021.