The NSW Government, through Create NSW, has had another busy year of driving the arts, screen and culture agenda across the State.

Reviewing the achievements of 2019, Minister for the Arts, the Hon. Don Harwin MLC said:

“NSW is leading arts, screen and culture, and this year’s achievements through Create NSW are worth celebrating.

It’s been a momentous year and I’m delighted that not only have we delivered $56m in support for NSW artists and organisations, but we have also implemented a major improvement for our arts funding program to make it easier and simpler than ever before. I want to particularly thank the experts who came forward to serve on our Artform Boards to provide leadership in their sectors.

“In Screen, we have secured the future of thousands of jobs by confirming major Marvel blockbusters to film in the State. We have supported a thriving local domestic industry and attracted one of the largest visual and digital effects companies in the world, Industrial Light & Magic, to NSW.

“And we wouldn’t be anywhere without the cultural infrastructure to house our artists and organisations. This year we’ve seen the first of our $100m Regional Cultural Fund projects come to life, led and announced the winner of the international competition to design the new Powerhouse, secured a long-term lease for the National Art School and begun major development projects for the Walsh Bay Arts Precinct, Australian Museum, the Art Gallery of NSW, and the Sydney Opera House Concert Hall – not to mention begun the search for a new operator for the Theatre Royal – something that will greatly enrich the State even further once reopened in 2021.

Here’s a selection of just some of our highlights:

Delivering cultural infrastructure plays a huge role in creating great places to bring people together, and we’ll be right back into building the creative backbone of NSW, supporting the artists and organisations who bring these buildings, our cities, suburbs and regions to life and helping to develop and make more innovative screen content in 2020. 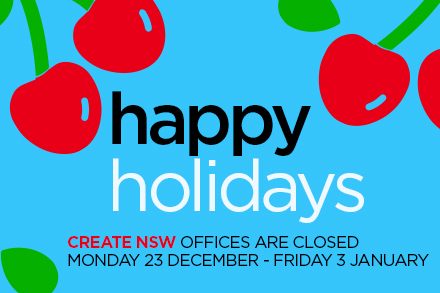