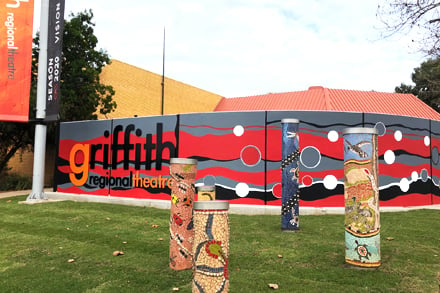 A striking mural representing the Wiradjuri People now welcomes visitors to the upgraded Griffith Regional Theatre thanks to support from the NSW Government’s Regional Cultural Fund.

The Upgrade and Revitalisation of Griffith Regional Theatre project has given its amenities a much-needed makeover, greatly improving the quality of visitor experience with all areas of the building now being fully accessible.

The $1.2 million project is the most significant enhancement to the theatre and its facilities since it was opened in 1987 and consists of four major areas of work:

The new acoustic panelling in the auditorium has significantly improved sound quality especially for patrons with hearing impairment, while the fully accessible bathrooms throughout the building allows for all members of the community to participate in all aspects of the theatre whether as patrons or performers.

The striking entrance statement also sends a message about inclusivity and recognition, with Veronica Collins’ powerful mural highlighting the continuing presence of the Wiradjuri People as Traditional Owners of the Land.

The upgrade of Griffith Regional Theatre is one of 136 projects across NSW supported by the Regional Cultural Fund that are creating opportunities for greater community interaction with all forms of artistic expression through recreation, participation and education. As well as providing a platform to promote cultural tourism.