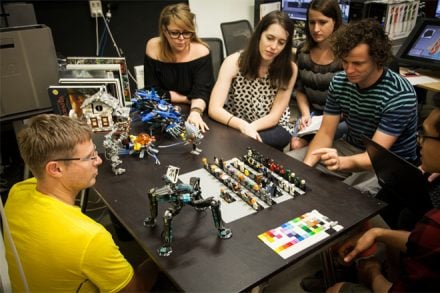 The team at Animal Logic in Sydney discussing production design and art direction.

NSW artists are being called upon to be the first participants of a new partnership between Create NSW and internationally-acclaimed Sydney production company Animal Logic.

Three experienced NSW artists are sought across a wide spectrum of artforms, for the Animal Logic Artist in Residence pilot initiative, with each artist set to be supported with a grant of $10,000 to complete their respective three-month residencies.

As well as providing professional opportunities, Animal Logic will host a group exhibition to showcase work created by the artists during their residency.

Visual artist Ben Quilty is the Ambassador for the initiative, having worked at Animal Logic early in his career. He has since been awarded the Brett Whiteley Travelling Art Scholarship, Moran and Archibald Prizes, and an appointment to the board of trustees at the Art Gallery of New South Wales.

As part of his ambassadorship, Quilty will deliver talks to the Animal Logic community during the residencies.

Applications are open until midnight Friday 1 March 2019. Full guidelines can be found here.