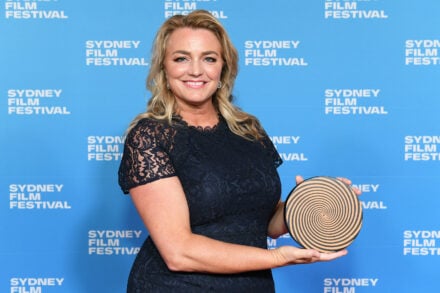 Acclaimed writer, director and producer Karina Holden has a passion for telling stories with a human-interest angle.

Karina’s key series include co-creating the critically acclaimed Screen NSW supported series Love on The Spectrum (ABC) with Cian O’Clery, Employable Me (ABC), See What You Made Me Do (SBS) and produced Strong Female Lead (SBS).

To add further to Karina’s long list of achievements, late last year, Karina was awarded the 2021 Sydney UNESCO City of Film Award for her significant contribution to the NSW Screen Industry.

Ahead of International Women’s Day Create NSW spoke to Karina about her new doco-comedy The Exhibitionists, which celebrates women in the arts and what drives her to bring these kinds of stories to the screen.

As a filmmaker and executive producer, you focus on telling stories with social impact. What motivates you to tell these kinds of stories?

It’s a privilege to be a storyteller in film and television. I believe in making the most of that opportunity by challenging the audience, bringing new perspectives, and contributing to culture by creating new forms of content and igniting ideas.

The Exhibitionist is a new doco-comedy which you co-wrote and executive produced. The inspiration for this project came from the National Gallery’s Know MY Name initiative. Can you tell us a bit about the innovation behind the film and the importance of promoting female-led art in Australia?

Having studied art history and learning so much about the great male painters whose work is eulogised, such as Tom Roberts, Arthur Streeton and Frederick McCubbin – I was aware of the gap in history that hasn’t included ‘her-story’. The fact is, there have been accomplished female artists working alongside the male cannon from the very beginning. Yet so many were side-lined or faded into obscurity, so we do not know their names. This film was a way to explore some of the fascinating women whose work should be celebrated, valued and hung on the walls of our state and national galleries.

With such rich documentary content, it was important to come up with a device that allowed all these stories to hang together. Knowing we had access to the National Gallery of Australia (NGA) in Canberra, I came up with the concept of having a dramatic framework to the film that would give the film an inciting incident, a journey and a final moment of climax.

Initially, I was hoping the NGA would let us break into the gallery and perform a reverse art-heist, smuggling in works of female artists. But that was pushing the fantasy a little too far. In the end, the story was built around four friends attending a cocktail event at the NGA, who dare each other to get locked in. It starts off as prank, but left in the gallery overnight, they start to question what’s on the walls, and where are all the female artists. If you aren’t aware, only 25 per cent of the Australian collection at the NGA is work by female artists.

After completing filming on all the documentary segments in the weeks prior, we then had a full drama shoot in the gallery over three nights –working to 3am each morning with a crew of 25 on set. Drama Director, Helena Brooks ran the shoot with Emma Paine as Director of Photography – and our four actresses, Mandy McElhinney, Bridie Carter, Bessie Holland and Veronica Milsom working late into the nights.

Having the whole of the NGA to ourselves was an absolute treat, slinking through the silence of brutalist architecture, with paintings peering from the darkness as we moved around with torches. It really was just like you see in the film, itself.

We worked closely with curators and art historians to determine which works to focus on, and with special handlers on set, we pulled off the final stunt of the film. By the end, we have a greater sense of the female artists from Australia’s history, past and present, and have stirred outrage over what they have faced: when they were pilloried for daring to paint subjects deemed masculine, ridiculed by misogynistic critics, or simply expecting the same opportunities as their male counterparts.

How does this hybrid model suit the subject of the film?

Working with a solid core of documentary elements, the drama allowed us to be playful and create an overall framework for the film. But it also allowed the subject to be more accessible and not simply a serious intellectual offering.

We ask the audience to suspend their belief with the concept of the film and set up the discovery to come from a group of pranksters. This allows the experts to be experts, and the actors to remain as players. But most of all, it allowed us creative experimentation – which let’s face it, would be a sin not to experiment with ideas and creative expression in an art film!

This year the theme for International Women’s Day is #BreakTheBias. What do you think we can do collectively, to help create a more gender equal world?

These stories of gender bias are critical for society to acknowledge, analysis and address through systemic change. Having being part of the team who made Strong Female Lead (2021) about misogyny in politics, making The Exhibitionists felt like another important story to tell – how our culture is the result of espousing one gender.

One of the interesting things I learnt in the research of this program is how the gender pay gap for women artists is around 42%, which makes it one of the most sexist industries for women to enter (from an income point of view) – and yet, 75% of art school students are women. Even today, there is a perception, that women enter the arts as a hobby, rather than a profession.

I sometimes see this in the film and television industry as well. Lots of young women enter the workforce, but are kept in roles that support male creatives, in administration or if they’re lucky, they’ll produce. But they rarely become the show runner or spearhead the business. You just have to attend an industry event and see who’s accepting the awards.

What we can do? Well we can take women seriously, support their creativity, and when we have the power to give them a place at the table – we should find the space for them.

What have been your biggest challenges as a woman getting behind the camera?

I recognise there are parts of the film and television industry that are very blokey and I’ve certainly sat in boardrooms where the respect for women was absent. Where younger women took the fall for the behaviour of powerful men. And sexual harassment was tolerated as part of the rough and tumble of the entertainment industry.

But I’ve also navigated to a space where I have found bosses who support and recognise my talent, not my gender. I’ve collaborated with both brilliant men and women, where we have respected and learnt from each other. At the end of the day, it’s about working hard and respecting the professionalism of your peers. At least it should be.

Do you have any advice for females wanting to break into the screen industry – be it directing, writing or producing?

Regardless of your background, culture, age, sex, or anything else – it takes hard work to make it in the screen industry. No one should feel entitled or believe they’re deserving of shortcuts. Starting at the bottom and putting in the work helps you become a better practitioner and a more respectful collaborator. Everything you learn on the way, will shape you. The industry is constantly shifting – and it takes a nimble and open mind to navigate.

In the digital age, there is the ability to be a content creator a lot faster than in previous generations. These are great tools to practise your craft and experiment. There is still a leap from short form to long form, and a further chasm that separates content made independently – to delivering to investors, broadcasters and streamers. Understanding this and knowing each step you take leads you to your goal will hopefully give you patience, in an impatient world.

Having an appreciation of the business side of the industry and learning what drives commissioning decisions is extremely helpful, as it’s not always the best idea that gets made. There are hundreds of other things at play – reputations, relationships, risk, money, competing projects, partnerships, brand alignment, schedules, tech innovation, talent and so forth. So, ideas need to align with these needs, not just be ‘a great story.’

Being passionate, not just about your own project, but about the broadcast environment is critical. Understanding trends, watching content on the networks you’re developing your ideas for, and learning to balance humility, confidence, deference, and passion are all important EQ skills in plotting a course through the creative industries.

I’m grateful for the career I’ve had to date, and it constantly feels like a ‘pinch me moment’, as each commission I work on feels like a miracle. When a broadcaster chooses to work with me on an idea, I never take that for granted. It really is an extraordinary honour to explore ideas and create moments that hopefully change people’s minds, bring joy or outrage, and push the discourse in society towards one that is empathetic, intelligent and inclusive. At least, that’s why I get out of bed every day – excited to get to work.

The Exhibitionist will Screen on International Women’s Day, Tuesday 8 March 2022 at 8:30pm on ABC TV and iview.