I Am Woman director Unjoo Moon is strong, invincible, and woman 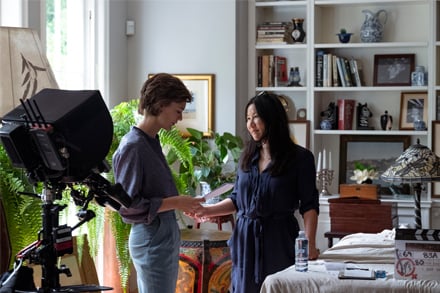 Image: Tilda Cobham-Hervey and Unjoo Moon behind-the-scenes on I Am Woman. Photo by Lisa Tomasetti.

Unjoo Moon’s directional debut, I Am Woman, is a biopic that traces the remarkable story of Australian singer and icon Helen Reddy through the feminist movement in America. Unjoo shared her thoughts on the film I Am Woman and her relationship with women’s rights icon Helen Reddy.

Thinking of I Am Woman and the Women’s Liberation Movement in America and Australia in the 70s – what do you think the parallels are today working in cinema?

I’ve watched the film in five countries with women and men from a range of ages, and they realise how relevant the film is to women today. A few high school girls wrote to me after one of the screenings saying how moved they were by the story. They had no idea how much work women had done before them, and how much work is still to be done.

How did you go about producing and directing such an amazing story?

Growing up I remember a time when my mother and her friends – these bright, intelligent, and vibrant women – would roll down the windows of their Volvo station wagons, let down their hair, and sing really loudly when Helen Reddy’s song, I Am Woman, was on the radio. I have this very strong memory of watching how that song transformed women, and the lyrics stayed with me as they do with most people.

With the rise and fall of her career as an artist, to how she eventually walked away from her career, I realised she had an extraordinary life and felt it was dramatic and cinematic. And when I met Helen at the G’Day LA Awards show I was surprised to discover that nobody had ever developed this Australian woman’s extraordinary story. I felt very passionate and empowered to be able to tell it.

Do you feel that this film’s going to start changing things?

Helen’s stories were so intricately tied in with the rise and fall of the Women’s Liberation Movement in America in the 1970s, including The Equal Rights Amendment that was proposed to guarantee equal rights for all Americans regardless of sex. Unfortunately, in 1982, it didn’t pass. And that’s very much a part of the story of I Am Woman.

And now there is a sudden resurgence to pass the Equal Rights Amendment. The end card on the film states that this amendment has never been put into The Constitution of the United States, and now there’s a big push to make it happen. Once the amendment passes, I would be proud to change that end card, and it would be worth it.

You’ve touched on the relationship with Helen and how you met; how are you both are going now with the release of the film and how did Helen react to it?

Before we locked the movie off, Producer Rosemary Blight (Goalpost Pictures) and I felt very strongly that we needed to show the movie to Helen and her family. We did a screening for Helen, her ex-husband Jeff Wald, and her two children. As a filmmaker, sitting in the cinema with Helen Reddy was, and it’s probably going to be, one of the hardest screenings I had to do for the film. I suddenly realised that this is her life and she was watching it through my eyes.

During the screening, Helen sang along to her songs, and when she cried, it wasn’t because she was sad that we made the movie, she cried because she found the whole experience so touching, and I think really cathartic in a way.

Did you find it much different from working with LA-based crew than a crew in NSW?

Yes. It is very different because there are a couple of rules and regulations that you don’t get here.

When does I Am Woman release in Australia?

In May 2020, and I’m really looking forward to people embracing the movie, and learning about Helen for the first time or falling in love with Helen all over again.

Watch the official I Am Woman trailer.

Image: Tilda Cobham-Hervey and Unjoo Moon behind-the-scenes on I Am Woman. Photo by Lisa Tomasetti.