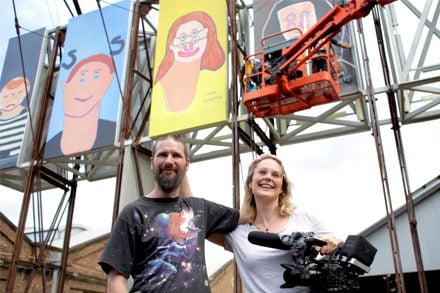 Artist Thom Roberts and writer, director & producer Georgia Quinn in front of Thom’s work for The National, Carriageworks on the last day of filming.

Studio A Documentary series explores the artistic practice and lives of six artists who see and communicate with the world around them, in a unique way, and challenge the perceptions society has of those living with intellectual disabilities. We spoke to the writer, director & producer – Georgia Quinn ahead of its release on ABC iview.

Studio A has supported artists with intellectual disability in achieving their artistic and economic aspirations since 2000. Do you see your documentary as a celebration of what’s been achieved?

Absolutely. Studio A is one of the most inspiring places I’ve ever visited, full of creative and positive people who are achieving amazing artistic career goals. The intention behind making the series was to highlight and celebrate this, and to shine a light on the huge achievements of both the individual artists and the collective as a whole.

What other reasons did you have for making the documentary and how did you go about getting started?

The series was commissioned as part of the ABC and Screen Australia Art Bites initiative for early-career filmmakers to create art content.

I heard about Studio A when I met Thom Roberts at an art fair in 2017. I visited their stall and was blown away. I reached out to Gabrielle Mordy – Studio A’s CEO and Artistic Director – to ask if she thought any of the artists would be interested in collaborating on a film project. We filmed a sizzle, I applied for Art Bites and it got selected – and later received further generous support from Create NSW.

The Studio A Documentary series follows the work of six artists – Greg Sindel, Emily Crockford, Daniel Kim, Meagan Pelham, Lisa Scott and Thom Roberts. What drew you to these artists and how do their stories drive the narrative?

Studio A represents nearly 20 artists now, each of whom work with different mediums and themes. It was hard to choose six narratives to focus on, as every artist at that studio could sustain their own feature film. I spent a few months at the studio before filming, getting to know the space and learning what each artist had coming up.

Studio A is unique because it exists to create professional pathways for the artists – it’s not just a hobby or art therapy for people with intellectual disabilities – but these artists are smashing milestones in their practice. I decided to focus on Greg, Emily, Daniel, Meagan, Lisa and Thom because they had significant public-facing exhibitions or projects happening in the October 2018 – March 2019 production period, which we could film observationally.

Additionally, I wanted to ensure that the diverse range of artistic styles, voices and intentions within the studio came across. I hope that this will allow a wide range of audiences to connect with the different works of the artists. There is sometimes a tendency to generalise the experience of people with intellectual disabilities and potentially discount the fact that, just like anyone else, everyone has their unique interests, passions, skills and ambitions. The tone of each film is greatly varied.

How important is it for the work to be character-led? What difference do you believe participation in the documentary has had for the artists and others involved?

The people in this documentary are professional storytellers in their own artistic practices. My role was to point a camera and try to share their work to a new audience on ABC iview outside of their current community in Sydney’s art world.

To help me write the scripts, the artists and I figured out what they wanted the ABC audience to know about their lives and their work. Meagan wanted people to feel as in love as she does, so her episode is very playful. Lisa wanted to show a non-disability audience what she and her friends were capable of, so hers has a more serious tone. To ensure that the documentary was from a first-person perspective, there was an active intention to have the artists narrate and drive the story (except for Daniel who doesn’t always use verbal communication). I didn’t want the films to be from the perspective of a parent or carer, explaining their experience of an artist with an intellectual disability.

Your film observes how these artists use their work to connect with the world and challenge commonly-held perceptions of people with intellectual disabilities as limited. From the insights and experiences you gained making the documentary, do you believe their work succeeds in doing this?

Undoubtedly. It wasn’t too long ago that Government policy institutionalised people with intellectual disabilities. The stigma that they are not able to contribute to the community in a meaningful sense remains. These artists are tackling this misconception head-on by representing themselves, by creating beautiful, inspiring and complex artworks. People often overlook the commercial aspect of the art industry – earning an income from their art, and it’s sometimes a ‘no-no’ topic. Studio A is a professional, income-generating and sustainable enterprise. This adds credibility to the public reputation associated with the artists and challenges the idea that they are any lesser than a neurotypical artist.

Are you still in touch with the artists? What are they up to now?

Of course! Unsurprisingly, they’re absolutely smashing it. They’ve just finished a residency at Peacock Gallery in Auburn and each artist is working on a group show at the Harbour Trust. The theme of the show is Home and it’s cool to see the different ways the artists are incorporating that theme into their work. Keep an eye out for that later this year.

This year, they’ll be at Sydney Contemporary and Spilt Milk. They have a few other things lined up that are still under wraps and you can you can follow their progress on the Studio A socials – Instagram: @_ studio_a_ and Facebook: @studioasydney.

As a documentary filmmaker, you are known to be drawn to topics dealing with social justice issues. What interests you most about such themes?

I originally came to filmmaking from an audience-driven background rather than a passion for the craft per se – I see it as such a powerful tool to broaden people’s perspectives. At uni, I studied international relations and anthropology, with a vague intention to work in the NGO sector. When I graduated, I had a slightly better understanding about global issues – but still felt just as helpless about how I could contribute. I took a step back and thought about how documentary had been instrumental in helping shape my worldviews and considered the power of these visual stories to mobilise change. This might be grand changes, such as helping change legislation, or personal changes, such as just encouraging more empathy and understanding across society. In these early stages of my career, I’m just keen to learn as much as I can about different forms of storytelling and models of change – and how best I can marry the two.

Image: Artist Thom Roberts and writer, director & producer Georgia Quinn in front of Thom’s work for The National, Carriageworks on the last day of filming.