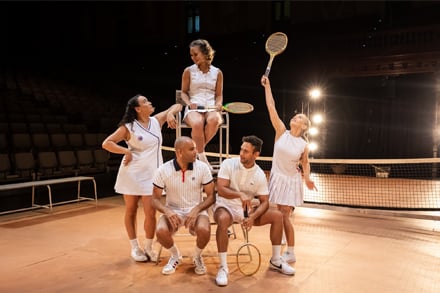 Sunshine Super Girl is a remarkable life story told with humour and humility by creator and director Andrea James, that asks us to consider Australia’s future, the injustices of the past, and the part we can all play for the next ‘Goolagong’ waiting in the wings.

Sunshine Super Girl is a celebration of tennis legend and Wiradjuri woman Evonne Goolagong’s inspirational life story. Evonne is a national treasure, why do you think it has taken so long to bring her story to centre court?

I honestly don’t know. It’s such a great story, full of twists and turns, drama and romance and it’s been nearly 50 years since she won her first French Open and Wimbledon finals in 1971. The time is ripe to celebrate such a great achievement. We’ve waited so long for another Number One Australian tennis player and Ash Barty has given us great hope.

What were the reasons behind the decision to tell and share Evonne’s story from a theatrical perspective?

Tennis is such a tense and physical sport and at times very unpredictable. Sometimes it feels like the whole world rests on one point. Each pairing up of a player at the end of the court brings a different dynamic to the game, depending on the personalities and quirks of each player. Call me a tennis geek, but it’s just so thrilling to watch two players hit balls at each other as hard as they possibly can. There are nowhere the players can hide. It really is a great spectacle and one that fits perfectly in a theatre setting I reckon.

How thorough was the research on Evonne’s life story? You met with Evonne during the production of the play? If so, what is she like?

Obviously, to dramatise the life story of a National Icon requires the highest respect and integrity and so applying myself thoroughly in the research phase of the project was fundamental. It was also important to travel to Evonne’s country, meet some of her family and friends and get a real sense of the landscape and cultural spirit of the place that made a world champion. Evonne is a very private person, but also incredibly down to earth. She’s dedicated her life since retiring from the circuit to “giving back” to the country that gave her so much; and she and her husband Roger work hard to provide education and sport pathways and opportunities for young First Nations children right around Australia.

What did Evonne think of your work?

I can’t begin to imagine what it is like to see your life played out before you on a stage in the glaring spotlight. Evonne and her husband Roger came to a reading presentation of the work and were genuinely moved. She’s cast a critical eye over the play when needed and I am very grateful for that.

Your production brings together an all-Indigenous cast and crew – tell us a bit about the process of bringing everyone together and what it’s been like so far.

There’s a great team for this project and everyone is so dedicated to telling this story with as much commitment and application of skill that we can. We’re telling the story of a World Number One athlete after all! There’s a beautiful combination of dancers and actors who’ve rallied to tell this physically adept story. It’s a strong ensemble and we have a lot of fun together in the rehearsal studio and I know that translates to the stage too. We really love and respect this story and it’s a joy to have watched it come to life with this stellar cast and crew.

How long have you been working on the story — from conception to production?

It’s taken about four years to bring this story to the stage. Researching, making contact with Evonne, creatively developing the script with a dramaturg, then building up the choreographic language and testing it out as a moved reading in front of an audience took years of careful nurturing and steady progression. The greatest asset of an ambitious new work is time and dedication.

The World Premiere of Sunshine Super Girl was held in Griffith. How has the shift been from taking the story from regional NSW to the CBD?

It was such an honour to premiere this show in Griffith on Wiradjuri Country, and it was important to us to receive that family and community blessing. This is where this story began and its always so powerful to feel that under your feet when you’re performing with the people, spirit and community of a place. This story is grounded in that place, it is because of that place that Evonne Goolagong was raised and flourished. We will definitely bring the essence of that with us to Sydney and wherever we take this show.

The play has also seen a full-sized tennis court installed in Sydney Town Hall— tell us how you sold that idea to Sydney Festival and how you worked the logistics!

Haha! I just leave that up to the expertise of the whip smart team at Performing Lines. From the very moment I imagined Evonne’s story for the stage, I knew that it had to be played on a tennis court with the audience in traverse. There’s something so spectacular when you’re courtside watching a tennis player hit a ball at 150kms an hour. It’s like a dance and when two players are in their groove it’s utterly mesmerising. I think the idea sold itself. It feels like an event and I’m just so thrilled that presenters have come for the ride and are extending themselves outside of their usual, to make the show happen. Evonne Goolagong has brought the best out in everyone I reckon.

Finally, will you get a have a hit on the Town Hall court come Festival time?

Absolutely! I’ve been working on my serve and volley. We had our inaugural “Goolagong Cup” tournament between Sunshine Super Girl cast and crew in Griffith, which Luke Carroll won (by a whisker) and the competition is fierce.