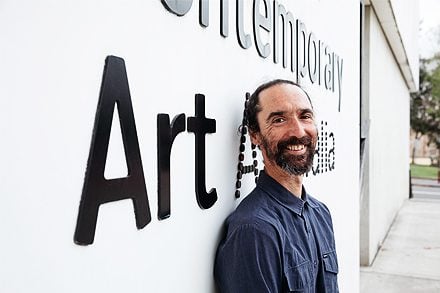 Beaubois, who works across the multi-disciplinary fields of video, photography and performance, will receive $30,000 in funding from Create NSW to focus a self-directed professional development program on ‘language, polyethnic nationalism and sovereignty’ in his home country of Mauritius and investigate virtual reality techniques with which to present his work.

“Denis Beaubois is a dynamic and acclaimed artist whose works have contributed to current artistic debate. Having been recognised with two influential international art prizes in his career to date, he is a fine example of a NSW-based artist making an impact on the global arts landscape,” said Ms O’Mara.

“His works strike a powerful chord across the world and his approach is a fine match for this first year of our partnership in celebrating visual artists with the MCA. I’m excited to see how his Fellowship program will propel his career further.”

The Fellowship was chosen by a panel of industry peers chaired by Mikala Tai, Director of 4A Centre for Contemporary Asian Art.

Beaubois will also undertake an additional project or acquisition commission from the MCA up to the value of $20,000.

MCA Director, Elizabeth Ann Macgregor OBE added, “The MCA is extremely pleased to be working with Create NSW on this fellowship providing outstanding support to a mid-career artist at a crucial time in their development.”

“Denis has contributed substantially to the development of video and performance art in Australia, he first exhibited with the MCA as part of the 2008 exhibition Video Logic. We congratulate Denis on winning this competitive prize and look forward to working with him in a new capacity,” said Macgregor.

His art has also been included in the SCAPE Christchurch (New Zealand) Biennial of Art in Public Space, the Rencontres Internationales Paris, Berlin Festival, the Koldo Mitxelena Kulturnea (San Sebastian – 2006), the Santiago Biennale (Chile – 2005), the Adelaide Film Festival (2005), and as part of the Berlin Transmediale program in 2004.

He has received numerous awards for his works most notably winning the 1998 Bonn Videonale (Germany), and received the Judges special prize for the Internationaler Medienkunstpreis 2001, ZKM (Germany).

Denis has also trained and worked as a performer and was a member of performance ensemble Gravity Feed and the Post Arrivalists. He has also performed with Japanese company Gekidan Kaitaisha in the Drifting View X in Tokyo.

He holds a Master of Arts in photography and performance as well as a Master of Fine Arts in Time Based Arts from COFA, UNSW, where he has previously lectured in video art.

Through his professional development program, he will learn the French-based Mauritian Creole language and look at Mauritian Nationalism as a polyethnic inclusive model, as well as ideas of sovereignty with a focus on Mauritius’ current claim on the Chagos Islands in the International Court of Justice against Great Britain.

His program will include research travel to Mauritius, a week with the Australian Department of Home Affairs in ACT and he will gain technical VR skills by studying the Unity software program at a course in Sydney.