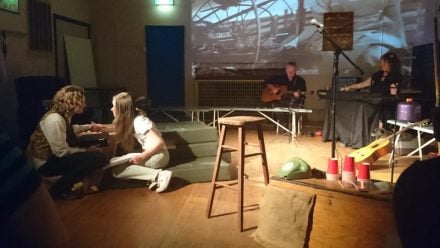 Kaput is the multi-award-winning family show combining slapstick, acrobatics and silliness, that has played all across the world. Led by ‘elegant buffoon’ Tom Flanagan, audiences are swept up in the mayhem as one man’s life is flipped upside-down by the lonely, dust-covered world that surrounds him. The clumsy ‘Mr. Fixit’ takes one step forward and two-steps back in a highly skilled, hilariously funny and beautifully poignant bit of madness.

The production was first seen at the Adelaide Fringe Festival in the Garden of Unearthly Delights in 2012 where it was nominated for Best Circus & Physical Theatre, before receiving critical acclaim and the Mervyn Stutter Spirit of the Fringe Award at the Edinburgh Fringe Festival in the same year. It has since toured four continents and won countless further awards.

In addition, Mudgee-based producer Sam Paine has received a $8,750 Community Presenter Touring Grant to extend his interpretation of BiDiNG TiME to nearby Coolah, Nyngan, Gilgandra, Wellington and Dubbo throughout April 2018.

Shared through an intentionally unfinished text, the project seeks to create sustainable fairtrade theatre by encouraging local artists to adapt the production to suit their own context.

Create NSW CEO Michael Brealey said that the initiative with Arts on Tour is important in helping to increase arts participation across NSW.

“Working with Arts on Tour allows us to increase access to affordable theatre and high quality professional performance, and give communities across NSW, in particular families, the opportunity to engage with live theatre across local venues. We are delighted to be able to bring both shows to regional NSW.”

The Community Presenter Touring Grant is a three-year Create NSW funding initiative administered by Arts on Tour offering support across two funding rounds per year. It provides funds towards performance fees to extend the reach of professional productions to smaller towns and remote communities in NSW that do not have a professional performing arts venue. This is the second year of the funding.