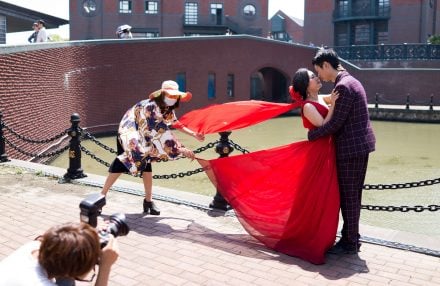 At Thamestown just out of Shanghai. Thamestown is a residential town modelled on England. A faux England. It’s main purpose has now become a location point for pre wedding photography. Here we see a couple posing in front of the University style building and bridge. June 2015.

Following success with The Go-Betweens: Right Here and ahead of the upcoming 2018 film Double Happiness: China Love, Create NSW and ABC Arts have opened a call for applications for the 2019 Documentary Feature Fund, the joint initiative now in its third year.

Each feature length arts documentary funded through the initiative receives a world premiere at the Sydney Film Festival prior to screening on ABC, with Create NSW contributing $100,000 to each production and the ABC allocating a $150,000 license fee. Both finished films have also received additional major production funding from Screen Australia.

Create NSW Director of Sector Investment Sophia Zachariou said, “From rock music to the fascinating phenomenon of Chinese pre-wedding photography, this is a great chance for filmmakers to really explore the unexplored and captivate audiences with their chosen subject – whatever that may be!

“Kriv Stenders’ The Go-Betweens: Right Here was a fantastic production and we’re very excited about unveiling Double Happiness: China Love later this year. Good things come in threes as they say, so we’re looking forward to seeing what we can discover in this third year of a fantastic partnership with the ABC.”

ABC Manager of Arts Richard Buckham added, “The ABC is proud to have partnered with Create NSW to initiate the Documentary Feature Fund. Initiatives like this are integral to the Australian filmmaking industry, allowing us to invest in quality local content and highlight the rich and diverse range of Australian stories. I look forward to reviewing some exciting applications for our 2019 fund.”

“The Festival screened the world premiere of Kriv Stenders’ The Go-Betweens: Right Here to full houses in June last year. The world premiere of Double Happiness: China Love will be an equally entertaining, high quality Australian addition to our upcoming 2018 program,” she said.

Now in post-production, the 2018 film Double Happiness: China Love, the directorial debut from celebrated photographer Olivia Martin-McGuire, explores contemporary China and its relationship with Australia from the fascinating aspect of the burgeoning pre-wedding photography industry.

Produced by Media Stockade’s Rebecca Barry and Madeleine Hetherton, the film is set to screen at the 65th Sydney Film Festival taking place between 6 – 17 June 2018, followed by a national broadcast on ABC.