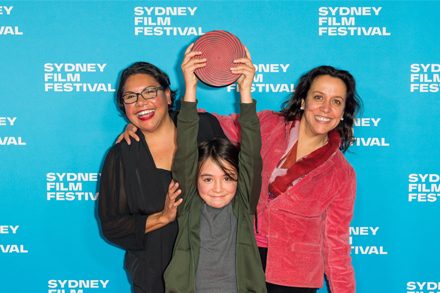 Acclaimed Sydney-based production company Blackfella Films has been awarded the 2019 Sydney UNESCO City of Film Award at the Closing Night of the 66th Sydney Film Festival.

The award was presented to Darren Dale, Rachel Perkins and Miranda Dear by acclaimed actress Deborah Mailman, a long-term collaborator of the team who starred in the production company’s ground-breaking television series, Redfern Now.

The $10,000 cash prize is bestowed annually by Create NSW, under the auspice of Sydney UNESCO City of Film, to outstanding NSW-based screen practitioners whose work stands for innovation, imagination and impact.

Accepting the award, Darren Dale said, “It is humbling and thrilling to be acknowledged for making work that we are so passionate about. We consider ourselves incredibly fortunate to be able to do what we love every day. This acknowledgement is not only of Blackfella Films, but of all the incredible collaborators – the actors, writers, directors, artists, crews, the list goes on – who are so integral to any success we may have.”

Rachel Perkins said, “Blackfella Films was established during a time of Indigenous cultural-resurgence. We are proud to be a part of the broader wave of Indigenous film and television that Australia rightly embraces as some of our best cultural expression. Twenty-five years on Blackfella Films is still going strong and we are working towards a more unified nation through storytelling.”

The prize also includes up to four-weeks’ residence at Charlie’s, a hub for the Australian film-making community in Los Angeles, opened by Australians in Film, in partnership with Create NSW, AFTRS, Screen Queensland, Film Victoria and South Australian Film Corporation.

Create NSW Executive Director Investment & Engagement, Elizabeth W. Scott said, “Blackfella Films have been responsible for some of this country’s most outstanding and innovative content including First Australians and Redfern Now. Each year they continue to expand their film and television slate in new and exciting ways and we are delighted to celebrate their ongoing success with this award.”