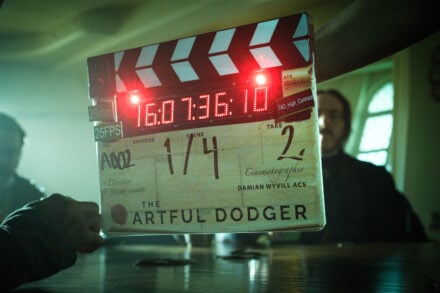 Still from the set of The Artful Dodger. Photo by John Platt

Screen NSW has secured another blockbuster with Disney+ Original series The Artful Dodger the latest large-scale production to be filmed in the State.

The Artful Dodger series will further cement the State’s reputation as Australia’s premiere filmmaking destination, creating jobs and boosting the NSW economy thanks to the talented cast and crew in NSW, and with the tactical support of Screen NSW’s $175 million Made in NSW fund, and will create more than 170 employment opportunities for local cast and crew, and utilise the services of local businesses to support the production.

Set in 1850s Australia, the eight-part scripted series, which received support from Screen NSW’s Made in NSW fund, explores the adult double life of Charles Dickens’ famous prince of thieves – Dodger – now a surgeon, but who can’t shake his predilection for crime. The series is co-created by James McNamara, David Maher and David Taylor.

The Artful Dodger is a co-production with Sony Pictures Television (SPT) and produced by Beach Road Pictures and SPT’s Curio Pictures for Disney+.

“We’re so grateful for the incredible support from the NSW Government through Screen NSW for The Artful Dodger,” Mr Maher and Mr Taylor said.

“Producing this series at home in NSW offers us world class facilities, the opportunity for locally based cast and crew to work alongside a mix of highly experienced local and international creatives, and access to some of Australia’s most beautiful locations. We couldn’t be more excited.”

The Screen NSW Made in NSW Film fund has attracted over 40 international productions to the State since 2020.

Image: Still from the set of The Artful Dodger. Photo by John Platt