Elaine Crombie is having a laugh ahead of the Funny Women! panel at Vivid Ideas 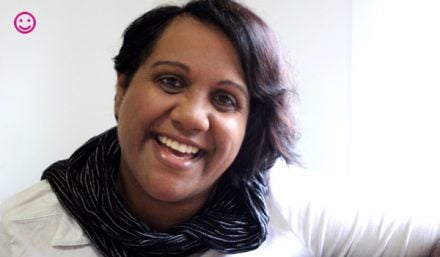 As part of Create NSW at Vivid Ideas, we caught up with panellist Elaine Crombie who will join a panel of funny five women changing the face of Australian comedy, focusing on comedy as activism, showcasing a diverse panel of game-changing comedians working across the arts and screen sectors.

We are excited to have you on our Funny Women! panel as part of Create NSW at Vivid Ideas. How did your journey begin as a performer?

My journey began when I played the teacher role in my primary production of Hating Alison Ashley.

You have had such a huge 12 months working on an award-winning theatre show Barbara and the Camp Dogs by Ursula Yovich and Alana Valentine. You have also featured on some of Australia’s top comedy programs including Black Comedy and Nakkiah Lui’s iview comedy series Kiki and Kitty. How do you traverse these different mediums within your performance practice?

Acting is acting and any chance to do it is about me practicing my craft and honing my skills.

What kind of comedy do you love? Who are your greatest influences in comedy?

Right now, I’m in a Dunder Mifflin binge and I think it’s witty and watchable and easy to consume. I love big casts and sitcom style. I want that for my Blak cohort.

What kind of comedy do you despise?

I recently followed a comedian on Twitter and watched his hour special and thought it was the worst viewing I had watched but I was still watching it as the credits rolled. I realised it’s because there is always something to learn, even if it isn’t what we’re into.

What can you do with comedy that other genres can’t achieve?

Deliver any message in the world.

Where can we watch you next?

You can watch me now on ABC iview in Rosehaven, Season Two – Episode One (I think), Kiki and Kitty, and on NITV on Friday nights at 7:30pm in Grace Beside Me playing Miss Long. You can also catch me on Netflix in 8MMM Aboriginal Radio portraying the best worst receptionist in Central Desert and my next upcoming thing, I’m pretty sure, is Nowhere Boys on ABC.