The Minerva Theatre – also known as the Metro Theatre – is a 1930s Art Deco local landmark building located in Potts Point. It was used for live performances and as an entertainment venue until it closed in 1976.

A feasibility study was co-funded by NSW Government and the City of Sydney in late 2020, which identified there is commercial market interest, and it is operationally viable, to re-open the theatre. 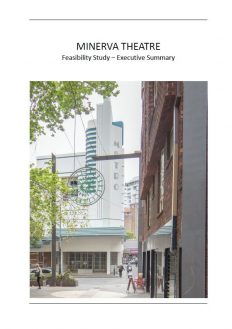