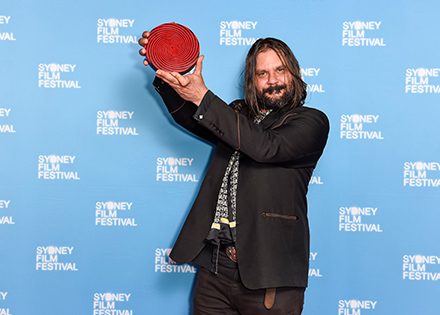 Warwick Thornton, the acclaimed filmmaker and artist, was last night awarded the 2018 Sydney UNESCO City of Film Award at the Closing Night of the 65th Sydney Film Festival.

The $10,000 cash prize is bestowed annually by Create NSW, under the auspice of Sydney UNESCO City of Film, to an outstanding NSW-based screen practitioner whose work stands for innovation, imagination and impact. The two previous recipients have been Lynette Wallworth and Leah Purcell.

Presenting the award bandaged after a soccer accident, artist and close friend Ben Quilty said that he looks up to and admires Warwick, who he called “perhaps the biggest conceptual thinker” he’d ever met.

Receiving the award, Warwick Thornton said, “This is awesome, thank you. My whole family is in the crowd tonight. I flew in last night to go and watch my son’s [Dylan River] movie Finke: There and Back, which just blew my mind, and it’s only because I taught him everything he knows.

“But my mother flew in to watch the film as well, and I haven’t seen my mum for a while because she lives up in Cooktown. And I just want to say that everything that you see on that screen and every movie that you ever see that I make, is because of my mother. She made me believe in dreams, made me run amok and do things my way, and she opened doors and introduced me to some of the most amazing filmmakers in Australia. And those amazing filmmakers taught me some of the most beautiful morals and ideas about cinema. And so for mum – I thank you, and to all those incredible filmmakers who taught me how to make a bloody movie – I thank you.”

The prize also includes up to four-weeks’ residence at ‘Charlie’s, a hub for the Australian film-making community in Los Angeles, opened by Australians in Film, in partnership with Create NSW, AFTRS and Screen Queensland. ‘Charlie’s’ offers a unique creative workspace in Charlie Chaplin’s former apartment at the historic Raleigh Studios in Hollywood, for Australian screen practitioners to conduct business, collaborate and network.

Warwick Thornton’s most recent film, Sweet Country, garnered audience and critical acclaim around the world, winning major awards including the Special Jury Prize at the Venice Film Festival, the Platform Prize at the Toronto International Film Festival and Best Feature Film at the Asia Pacific Screen Awards. His first feature film Samson & Delilah won the Camera d’Or for best first feature film at the 2009 Cannes International Film Festival. His other directorial credits include the 2017 Sydney Film Festival opening night film We Don’t Need A Map and The Darkside.

Warwick is also a renowned cinematographer, with credits including The Sapphires, Radiance and Here I Am. He is also a highly regarded visual artist and photographer.