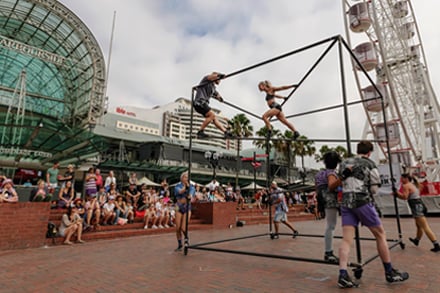 From comedy events and live band nights to roving carnival performers, Sydney is the place for entertainment after the NSW Government announced funding for an additional 10 recipients in Round Two of the Play the City initiative.

The initiative has proven popular since its launch, attracting people back to Sydney’s CBD and supporting jobs in the entertainment and hospitality sectors.

With over 100 projects now funded through Play the City, the NSW Government is giving local artists the support they need to open up venues and public spaces safely and in a COVID-safe manner across Sydney’s CBD and surrounding inner city suburbs.

The Play the City (Sydney) funding program is already supporting a program of activities, events and performances to activate the Sydney CBD, from circus artists in Darling Harbour to a World Music collaboration in the Rocks and CBD, and band nights at pubs and clubs.

The $363,000 extra funding for Round Two brings the total support for the Play the City (Sydney) NSW Artists and Musicians Grants to more than $1.86 million.