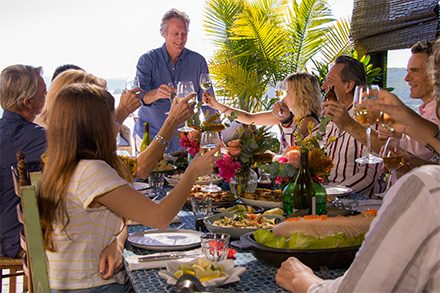 The talent and skill of the New South Wales screen industry will be on show at this year’s 66th Sydney Film Festival with 18 NSW Government-supported projects selected including 17 features, documentaries, short films and one television drama series.

Create NSW Executive Director Investment & Engagement, Elizabeth W. Scott said, “Create NSW takes great pride in supporting the screen sector with initiatives that reflect the reallife diversity found across the State. It is hugely rewarding to see so many of our supported projects included in this year’s Festival, including the Opening Night film Palm Beach.”

“Directed by Rachel Ward with co-producers Deb Balderstone and Bryan Brown, Palm Beach, with its crew of more than 50% of women in senior positions both in front of and behind the camera, is a great example of Create NSW’s commitment to screen gender parity (50:50 by 2020).

2019 also marks the third year of the successful Screenability program at the festival, the platform for screen practitioners with disability that is produced in partnership between the Sydney Film Festival and Create NSW.

US actor RJ Mitte (Breaking Bad) will speak at a Screenability event on Saturday 15 June held at Hoyts Entertainment Quarter and attend the world premiere of NSW-shot rom-com Standing Up for Sunny.

Festival audiences will also have a chance to see all four episodes of Lambs of God from director Jeffrey Walker (Ali’s Wedding) on the big screen. The dark, gothic and twisted Foxtel mini-series about three eclectic nuns living on a secluded island saw investment through Create NSW’s Made in NSW TV Drama funding.

“And celebrating over 50 years of the inspirational artworks created for Kaldor Public Art Projects, It All Started With a Stale Sandwich, directed by Samantha Lang, is the third film funded under the Create NSW and ABC TV Arts Documentary Film Fund. With major production funding also from Screen Australia, it will have its world-premiere at the festival ahead of an ABC broadcast on 24 September 2019,” said Ms Scott.

On the festival’s Closing Night, the fourth recipient of the $10,000 Sydney-UNESCO City of Film Award will be announced. The award is presented by Create NSW to an outstanding NSW-based screen practitioner, with previous winners to date Lynette Wallworth, Leah Purcell and Warwick Thornton.

HEARTS AND BONES
Director: Ben Lawrence
In Ben Lawrence’s beautifully acted debut feature, a war photographer (Hugo Weaving) and a refugee (Andrew Luri) discover a photograph that threatens to destroy them both.

I AM MOTHER
Director: Grant Sputore
Hilary Swank and Clara Rugaard star in a compelling Australian sci-fi about a human child raised by a robot mother in a post-apocalyptic future. Official selection, Sundance.

STANDING UP FOR SUNNY
Director: Steve Vidler
Breaking Bad’s RJ Mitte stars in this charming Australian rom-com about a loner with cerebral palsy who is roped into helping a comedian (Philippa Northeast) overcome her shyness.

SUBURBAN WILDLIFE
Director: Imogen McCluskey
The highly anticipated hometown debut – after its premiere at Cinequest Film Fest – of this authentic depiction of suburban angst and the struggles of young, post-Uni Australians.

IT ALL STARTED WITH A STALE SANDWICH
Director: Samantha Lang A savvy celebration of the inspirational artworks created for Kaldor Public Art Projects over 50 years, with artists including Christo, Abramovic, Jeff Koons, and Gilbert & George.

SANCTUARY
Director: Kaye Harrison
The intimate story of Khaled, a young man struggling to hold onto his humanity as he searches 10 years, across continents, for peace and freedom.

MAGNETIC
Director: Nicole Delprado
Bella walks the fine line between mental illness, creativity and identity, as her road to diagnosis jumps from cured to complicated.

PRONE TO THE DRONE
Director: Daisy Montalvo
Sam, a lonely introvert stuck in the darkness of his home, is confronted with a problem when two young boys drop a drone in his backyard.

ALL THESE CREATURES
Director: Charles Williams
An adolescent boy attempts to untangle his memories of a mysterious infestation, the unravelling of his father and the little creatures inside us all.

BETWEEN TWO LINES
Director: Jack Steele
When two First World War enemy soldiers become stranded in no man’s land, an unlikely bond is formed. Will they still be able to pull the trigger if the time comes?

SNARE
Director: Madeleine Gottlieb
In a schmaltzy late-90s Chinese restaurant, a father and his punk-rock son struggle with their familial roles as they realise they each desperately need something from the other.