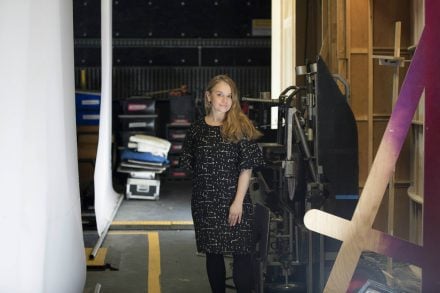 We spoke to Jessica Giacco about her time working with Bruce Beresford whilst undertaking her Create NSW Emerging Producer Placement on Ladies in Black.

You were recently selected as the Create NSW Emerging Producer Placement. Part of the placement included working with the producers of Ladies in Black. Can you tell us about working with Sue Milliken and Allanah Zitserman on that project?

Both producers bring such different styles and strengths and it was quite wonderful to see how they incorporated this into making a really strong team. Sue was more focussed on the production, budget and crew while Allanah was highly involved with investors, casting and marketing. Combining these strengths made for a formidable team. I am now constantly using the knowledge I acquired from both Sue and Allanah in my own producing work, often without even realising it!

Ladies in Black has a lot of archival footage also – what was your role in securing that for the production?

There is some archival footage of Sydney in the film including a horserace at Randwick Racecourse, which Shane Jacobson, who plays Lisa’s dad in the film, is watching on the television in a scene. One of my favourite nerdy things to do is sourcing old footage, so I loved this job. There are also several classic film posters from some old films such as On the Beach, The Nun’s Story and the French film La Regle du Jeu. There is also a poster and a clip from the French film Gervaise, which Fay (Rachael Taylor) and Rudi (Ryan Corr) watch on their first date.

One of my main tasks was to track down and clear all the artwork, likenesses and clips used in the film – a time consuming process which involved back and forth with various production, distribution and licensing companies around the world. Even the Audrey Hepburn Estate needed to approve the use of her likeness in the Nun’s Story poster on film and I actually spoke with her son on the phone about it. It’s so satisfying to now see all these posters, artwork and clips in the film and know that I played a role in having them there.

Tell us about shooting the night club scene with Kate Miller-Heidke?

There is a nightclub scene where Fay (Rachael Taylor) and Myra (Celia Massingham) have dates with a couple of Aussie blokes. A live band performs with renowned singer Kate Miller-Heidke performing. Shot at Portenos Nightclub in Surry Hills, it was so much fun and something to remember. Bruce also had so much fun while shooting it. We had a great chat about the films that made us want to make films on set that day.

The film, which required recreating 1959 department store glamour, was created inside Fox Studios. Can you tell us a bit about that?

On the first day of the shoot we shot some of the main department store scenes, in the original seventh floor of David Jones in the city.

The production designer, Felicity Abbott, recreated that glamour by building the model gowns set inside a stage at FOX Studios, where much of the film was shot. Our production office was right above the studio and it was so great to be able to go downstairs each day and spend some time on set, like a super styled, 1950s dream land for fashion – often I’d sigh with disbelief.

We hear that there was an entire sewing department for the costumes. Can you elaborate on that?

The fabulous costume department, headed by costume designer Wendy Cork, had a section just for tables of sewers making costumes by hand. It was so much fun to go to the costume department and wander around the massive area full of beautiful vintage outfits, each one so unique. Even the extras had authentic 1950s wardrobes – it was truly like stepping back in time. The perfection put into each costume and the hair and makeup was stunning.

Who did you love on the set?

Everyone was so wonderful that’s a hard question to answer! Ryan Corr and Vincent Perez were both so friendly and charming, so was Angourie Rice. But if I had to pick a favourite it would be Bruce. He was just so lovely and generous to absolutely everyone involved. Even when stressed he would be so relaxed and cracking jokes, I can’t state enough what a joy he was to work with.

A project I’m working on with documentary ingenue Georgia Quinn will start shooting in late September. Called Studio A, it is 6 x 5-minute series of documentaries for the ABC and Screen Australia, Art Bites Initiative. Create NSW is also funding the project, which will be screened on ABC iview, in 2019.

A short film I worked on earlier this year has just been announced to screen at Adelaide Film Festival. It is called A Low Hum and is directed by Scott Otto Anderson from Photoplay Films.

I am also continuing to work with Allanah Zitserman by joining her production company – LUMILA Films, which is in a stage of exciting growth with the upcoming release of Ladies in Black. With several unique projects in the works, I will be working with Allanah on developing LUMILA’s slate, big things ahead!