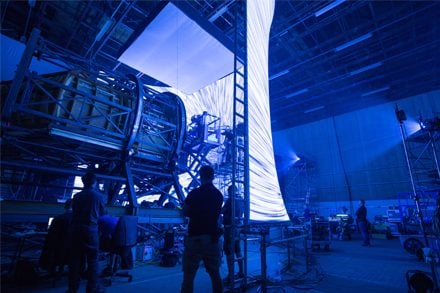 Rear projection screen being used on set for Solo.

More than 500 local jobs will be created when Disney-owned visual effects company Industrial Light & Magic (ILM) sets up a new studio in Sydney, establishing NSW as a global destination for post, digital and visual effects (PDV).

ILM’s decision to choose NSW as its Australian base is a big win for the State. ILM is responsible for the visual effects of more than 350 feature films, including Star Wars, Aladdin, Pirates of the Caribbean and The Avengers. This is only the third studio ILM has opened outside of North America. The digital skills taught by the best in the world will also benefit many other industries in NSW, including software development, robotics, engineering and defence.

The announcement follows the NSW Government’s recent move to offer a 10 per cent tax incentive for PDV firms investing over $500,000 in NSW. This is on top of Federal incentives, making NSW an even more attractive location for film production.

The new incentive brings NSW in line with global locations such as the US, UK and Canada, in addition to competing States.

As part of today’s announcement, the NSW Government will also provide a $6 million contribution which will be matched by ILM to establish training programs to build specialised PDV skills for local workers.

Securing ILM’s setup in Sydney will deliver an estimated $333 million in postproduction business in the first five years and an expected $100 million each year after.

Mr Hetherington will see his role expand to include the new ILM studio, which will set up initially at Fox Studios Australia as the company researches options for their permanent Sydney studio.

Image: Rear projection screen being used on set for Solo.