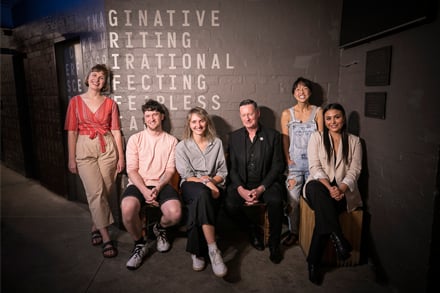 Playwright Ang Collins, theatremaker Frieda Lee and theatre directors Justice Jones and Claudia Osborne are the four emerging practitioners who will complete three-month theatre residencies ahead of one being selected as the first recipient of the Create NSW and Griffin Theatre Company Incubator Fellowship.

The four will receive professional mentorship from the theatre company as they work on the creative development of new works, before an inaugural Fellow is selected to receive $30,000 from Create NSW for a self-directed program of professional development in Australia or overseas.

Create NSW Executive Director Chris Keely said that the four had an exciting time ahead of them.

“Griffin Theatre Company has a fantastic reputation for its ambition and careful support of artists, so I know these residencies will prove a great education to our shortlisted emerging practitioners as they look to hone their careers.

“I’m excited to see how the residencies will help steer their development and how our final Fellow can take this even further with their chosen path of progression,” he said.

Phil Spencer, Artistic Associate at Griffin Theatre Company said, “We are thrilled to be supporting the professional development of these four emerging artists and welcoming them into the heart of our new writing company.

“The next few months will be an extremely productive time for everyone involved in the program here at Griffin. Obviously we are looking forward to awarding the full fellowship to one of these talented artists, but we are, as ever, also very excited to be establishing creative relationships with the next wave of NSW theatremakers.”

The shortlisted emerging theatre practitioners are:

Ang is an emerging playwright originally from Newcastle, NSW, now based in Sydney. She holds a Bachelor of Arts (Languages) from the University of Sydney and a Master of Fine Arts (Writing for Performance) from NIDA.

The Incubator Fellowship will provide Ang an opportunity to write a play about the climate crisis in Australia. Her program will consist of a self-directed research and drafting process, dramaturgical developments and a traveling research component to investigate theatre within the climate crisis future.

Justice Jones is an emerging director based in South Western Sydney from a culturally and linguistically diverse background. Justice holds a Bachelor of Music, majoring in classical voice at the Sydney Conservatorium of Music and has recently received the 2019/2020 BBM Global Industry’s Drama Scholarship. She is currently studying a Masters of Fine Arts, majoring in Directing, at the National Institute of Dramatic Arts (NIDA).

The Incubator Fellowship will provide Justice with an opportunity to create a piece of theatre that explores the Middle Eastern immigrant experience through engaging with real stories from her own community and through international research in Germany where a quarter of people have an immigrant background.

Frieda Lee is an emerging Sydney-based theatremaker from a culturally and linguistically diverse background. She holds a Bachelor of Performance in Arts (Performance Making), an Arts/Law degree and a Master of Human Rights.

The Incubator Fellowship will provide Frieda an opportunity to focus on the development of new work ‘All His Beloved Children’, a playful, modern myth about sex, violence, depravity and the creator’s first children, and a homage to creation stories of world religions.

Claudia Osborne is an emerging Sydney-based director whose practice focuses on the excavation and exploration of characters within highly-stylised and intricately crafted visual installations. Her recent experience includes directing the theatre productions The Lady or the Tiger, HOMESICK and LULU: A Modern Day Sex Tragedy.

The Incubator Fellowship will provide Claudia an opportunity to create work from a uniquely feminine perspective, that provides an in-depth psychological and physical exploration into representations of the female body, exploring dark and difficult themes relating to teenage girls and the idea of womanhood.