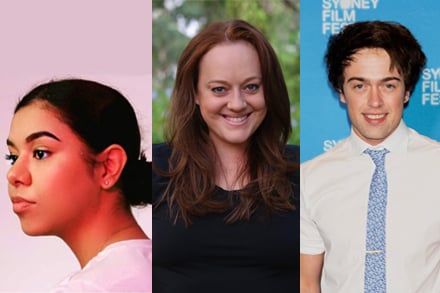 Recipients will each undertake a three-month placement with the Screen NSW Investment team, headed by Sally Regan, followed by a customised paid industry internship where they will have the opportunity to hone their craft in top NSW production companies.

Joshua joins Screen NSW on Monday 17 February, with Aaliyah-Jade and Joanna joining later in 2020. To encourage further professional development, all three will also be supported during their placements with opportunities to attend key screen industry events.

Head of Screen NSW, Grainne Brunsdon said, “The Emerging Producer Placement is now in its tenth year and continues to be a success for both practitioners and the production teams we pair them with.

“There’s an exceptional amount of emerging talent in the NSW screen industry and this initiative is all about finding new opportunities for undiscovered talent, often from underrepresented backgrounds, who are passionate about making their screen career in the State.

“This year we have selected three of the most promising newcomers who will be provided with the chance to learn from some of the very best production companies NSW has to offer. We’re very confident about their futures and excited to welcome them aboard,” she said.

Screen NSW is committed to supporting increased participation in the industry of people from under-represented groups including women, Aboriginal and Torres Strait Islander peoples, people from culturally and linguistically diverse backgrounds, people with disability, LGBTQI people, people from Western Sydney and people from Regional NSW.

Aaliyah-Jade Bradbury
Aaliyah-Jade Bradbury is a proud Indigenous woman from both the Larrakia Nation and Erub Island of Meriam Mir peoples. Aaliyah is from Sydney and was raised within the heart of Sydney’s Indigenous arts spaces. She became a radio producer for 702 ABC Sydney for Afternoons with James Valentine, Drive with Richard Glover and Evenings with Christine Anu.

Whilst at the ABC, Aaliyah hosted her own podcast for NAIDOC Week called The Jams with Aaliyah Bradbury. Aaliyah has held various roles across NGO and Government at organisations such as the Australia Council for the Arts, the ABC, NITV and Carriageworks, and is currently working on two feature documentaries.

Joanna Beveridge
Joanna Beveridge is a producer, writer and director based in Western Sydney. She has worked as a Creative Producer for NBCUniversal, Network Ten and ITV Studios and was recently a Director’s Delegate for the Australian Directors’ Guild at SPA’s annual Screen Forever conference.

In 2019, her award-winning web series Sydney Sleuthers screened at many festivals around the world. Joanna produced the Screen NSW Screenability funded short film Magnetic alongside Matchbox Pictures, which premiered at Sydney Film Festival. She was also a recipient of the Screenworks Go Viral! Initiative for Fempocalypse, a short film she co-wrote and co-directed.