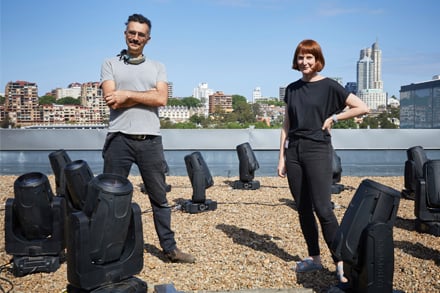 Message of hope, messages of love is a new major public artwork by artists Michaela Gleave, which will be projected from the roof of the Art Gallery of NSW and live streamed the evenings of 16, 17, and 18 October. We spoke to Michaela about the project that launches tonight!

How did the idea for Message of hope, messages of love come about and why have you chosen to translate the messages within the project into Morse Code?

This project was developed in direct response to the pandemic and was conceived during the lock-down period in Sydney. It was a strange time for creative practitioners. So many projects were cancelled or postponed, so many people were out of work, but there was also a flourishing of quick response projects and opportunities as the arts sector rapidly came to grips with this new situation.

I had worked with the lighting designer Fausto Brusamolino on a Morse-Code-based project presented at The Lockup in Newcastle over last summer, and he called me to suggest we collaborate on something in response to COVID-19, using searchlights and Morse code in the public realm. My imagination was immediately sparked, and the project came together very quickly over a couple of days. I thought how great it would be to use the sky as a space for creative communication, presenting an artwork that could exist as a long-distance physical artwork as well as a live stream. I wanted the project to spread feelings of optimism and happiness, and so the title and theme: Messages of hope, messages of love.

Taking the form of a collaborative poem, the work is composed of messages submitted by the public via the Art Gallery of NSW’s Together in Art website. What was the public’s response like and how did you go about selecting the right messages for each two-minute Morse Code display?

The public response has been amazing. It’s been heart-warming and humbling receiving the messages, which have come from all over the world. People really responded to the theme, with very heartfelt expressions of hope and love sent in. Arranging the messages into a poem has been a lovely process. I tried to imagine what each sender wanted to convey through their message and sequence them in a manner that would build and expand on the messages before and after.

How did you make the Morse Code translations? Did you require help from a Morse Code expert or was that something you did yourself?

Fausto, my collaborator, built a Morse Code translator into the custom software he developed for the project. The software reads each message in real-time and converts it into Morse Code light pulses. We worked with a Morse Code dictionary, which contains all the characters we need to use, so this aspect of the project was relatively straightforward.

Fausto and I have worked together on a couple of projects prior to this one, and it’s been wonderful to work with him again. He’s a very creative person, with a great aesthetic eye, and he does his own coding and programming, meaning almost anything is possible! We were introduced by a colleague and it’s been great developing this project, as it’s the first time we’ve created a project together from the ground up. Light has always been central to my practice but having access to his skill set and professional capacity has opened a whole world of possibility which is amazing!

What do you hope audiences ­– both online and in-person – take from your artwork?

Messages of hope and messages of love! The audience is at the centre of this work, and the project was conceived as a way for people to express feelings of hope and love for one another in a time of social distance. I hope to generate feelings of optimism and goodwill and share a general sense of love for humanity in these difficult times.

See how you can view Message of hope, messages of love online or in person.