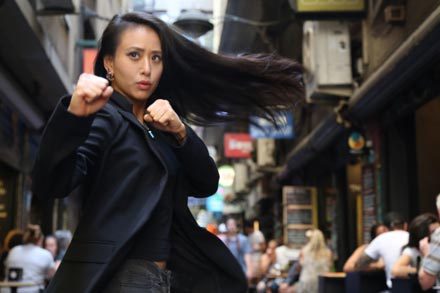 A Create NSW 2018 Western Sydney Arts Fellowship has led martial artist, actress and film-maker Maria Tran overseas to collaborate with and learn from screen-based stunt and action industry leaders and inspire women creatives in Western Sydney. We spoke with her to find out what her adventures have inspired.

Apart from enabling collaborations with action film creatives in Hong Kong, Thailand and Vietnam your Fellowship aims to nurture growing involvement of women from culturally diverse backgrounds in the creative sector. What’s been happening?

I have generated a core collective of culturally-diverse women to explore their artistic practices as well as collaborate with cultural development projects and communities across Western Sydney.

Our activities have grown organically, leading to touring overseas and production of Femme Fatales: Seen & Unheard – a documentary detailing our experiences.

I travelled across Asia with two other women to investigate the roles women must play in the male-dominated genre of action film.  At Hong Kong University we spoke about the martial arts action genre in Australia and interviewed several leading filmmakers – Barbara Wong, Lauria Wu, Winki Lai, Sharon Pan Yeung Yeung, Mandy Ho and Mike Leeder.

In Vietnam, we connected with A-list stuntwomen Truong Ngoc Anh and Lamou Vissay, who took part in our experimental on-the-fly short film. In the Philippines we met world champion martial artist Sarah Chang – one of the world’s few female fight action directors and discovered there is an untapped market for female-driven action films.

On returning to Sydney my production company Phoenix Eye created two female-led action feature film scripts – Hit Girls and One Black Night. As a collective, we solidified into a female-led production company embracing the ethos that women are powerful, uplifting and leaders in the media landscape.

While starring in action movies in Australia and overseas, including work with industry legend Jackie Chan, how have you carved out your career in this largely male-dominated space?

It’s an interesting balance of understanding the current landscape of women’s place in the industry and finding innovative ways to create change through disrupting entrenched beliefs and expectations. I don’t just see myself as just an actor, I see myself as a change maker and acting is a platform that gives me the entry into the industry change.

What is it about the genre of action that inspires you?

Action speaks louder than words – it’s what inspires me.  While growing up, my migrant refugee parents couldn’t understand and connect with Australian TV. By instead turning to VHS tapes of the Hong Kong action cinema is what allowed them to be inspired to keep on going, for my parents, whether it’s working long hours at the factory or having a repetitive job in a sweatshop, action films, particularly with Asian leads gave us hope that we could be active and the heroes(ines) of our destiny in this new country.

You founded Sydney-based Phoenix Eye Film Production to create films, corporate videos and documentaries. How did the company come into being and what is your vision for its future?

Phoenix Eye has grown organically. The road can be challenging and lonely for a solo artist. So, I scouted for Asian women in Western Sydney who wished to pursue the art in a supportive community.  Phoenix Eye was pivotal in uniting people as a shared resource that gave us time to explore and question ourselves, our practice and how Asian women are seen. It includes filmmakers, photographers, writers, producers, illustrators, storytellers and more.

Where do you see yourself and or Phoenix Eye Film Production in five years’ time?

I see myself more confident and applying an interdisciplinary approach to my work. I want to draw world-class training practices in acting and fight choreography into Australia’s industry. Phoenix Eye is a platform allowing me to realise this. It’s also allowing other emerging artists to become creative leaders.

I hope to create Australia’s first Asian female-led actioneer, to have a photographic exhibition in New York, and devise a training system for actors & fight choreography.  I want our work to come alive internationally. And I want good strategic planning to ensure Phoenix Eye navigates through the uncertain and shifting industry forces to thrive for years to come.