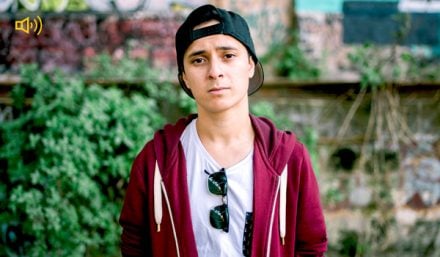 As part of Create NSW at Vivid Ideas, we caught up with panellist Rhyan Clapham AKA ‘Dobby’ who will join a conversation with a new wave of Aboriginal creatives across arts, screen and culture.

Thanks for having me! Currently I’m approaching our music industry from varying angles. Primarily, I’m a drummer and rapper (or drapper, for short), rapping under the rap pseudonym ‘Dobby’. I rap in a fantastic band called Jackie Brown Jr. I’m a composer under the mentorship of Chris Sainsbury through the Indigenous Composer Initiative, as well as Sydney University’s Peter Sculthorpe Fellowship. And if that’s not enough, I co-host a hip hop show on FBi Radio with the mighty Diola.

Congratulations on receiving the Peter Sculthorpe Fellowship for Emerging Composers. What has this Fellowship enabled you to do with your practice?

Thankyou! This Fellowship and the Indigenous Composer Initiative has helped shaped my musicianship and helped drive my stories in a very special way. As part of my Fellowship program, I’ll be focusing on the stories of the Brewarrina Ngunnhu (Ngemba for ‘Fish Traps’), bringing this knowledge and the issues surrounding the state of the river and town to the people that need to hear it.

You have such a varied history of music practice. You studied jazz across your formative years, specialising in percussion and piano. What got you into hip hop? Where did the shift in your practice come from?

After I started learning the drums in High School, I began listening to rappers like Outkast, Eminem and 50 Cent, and later turned to more nuanced sounds of the culture like Lauryn Hill, Common, The Pharcyde, J Dilla, MF DOOM and so forth.

I was drawn to this music; lyrically, rhythmically and spiritually. It helped me better understand the inner workings of storytelling, listening to these rappers share their stories in such a raw manner. Truly an artform.

Hip hop is a powerful tool with which to express knowledge, culture, identity and family, and so many aspects of hip hop culture meld well with Aboriginal culture. That’s why I studied Aboriginal hip hop for my Indigenous Studies Honours degree in University of NSW in 2015. I wanted to find the ways in which we have learned from hip hop’s roots in America and developed a unique culture of hip hop and rap in our communities here.

Why do you think hip hop is a powerful tool? What can hip hop do that other music genres can’t achieve?

Hip hop is a conduit to your story, and your own expression of self. No one can take that story away from you, especially when you shout those words out over a beat that leaves people dancing all night. Your entire story in 16 bars, 32 bars, it reaches their ears. That’s your time, no one else’s.

Right now, we’re hearing some voices in the community that would not have had a voice if it weren’t for hip hop, and when you combine Facebook, YouTube and Soundcloud, you’re hearing their stories loud, proud, and dope.

Kids are turning to hip hop to speak their minds and posting raps online. It’s free and it’s instantaneous! What a powerful educational tool we could be using nationwide to engage with our youth.

Those are some of the things that are very special about hip hop, and I think they’re some of the reasons that hip hop music recently surpassed pop music in popularity in America.

In Australia, we use hip hop to educate, express, and bring people together. For our mob in particular, we use it to also empower and strengthen, and speak truths about injustices.

You facilitate hip hop and drum workshops in community centres and schools throughout Sydney and regional NSW. What do you think the key is, in best preparing and inspiring our musicians of the future?

I think it lets kids know that they can do whatever they set their minds to. So many kids and adults still perceive a music career as impractical. We need to deconstruct young musicians’ preconceived ideas about the music industry, and reconstruct with confidence, creativity and curiosity when we work with them in our workshops and performances.

What is next for you?

I have a new song coming out very soon, with an accompanying music video that will feature all my favourite strong and hardworking blackfellas! I also have a six track E.P. that I’m uber excited to release around end of June.