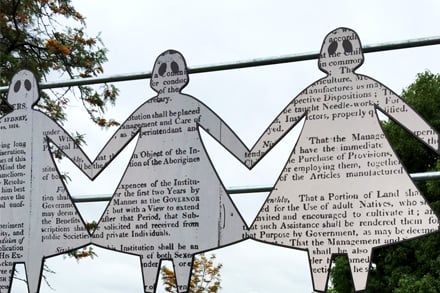 We talk to artist Leanne Tobin about her collaborative installation, The Gulbangali Dharug Nura Project, onsite at the Blacktown Native Institution for Biennale. An installation designed to inform, consolidate and heal.

Your installation, The Gulbangali Dharug Nura Project, with fellow artists Venessa Possum and Leanne Watson, will be part of the 22nd Biennale of Sydney, and used for a ceremony and cultural performance at the Blacktown Native Institution site (Day 1 & Day 2). Tell us how this collaboration come about?

Venessa, Leanne, and I are all active Dharug community members, and are all connected through our extended family lines. Over the years we have worked hard to have the Dharug voice heard and have collaborated on many varied projects together. I’ve worked with Leanne and her family for over 20 years to raise awareness of the Dharug people and the first contact stories of Sydney.

Not so long ago, the dialogue in the wider public arena was that all the Sydney Dharug people were wiped out from disease and dispossession and were extinct. The existing Dharug community was suppressed and some people, like my grandmother, kept our ancestry secret. Clumsy attempts were made to ‘make us white’, but forever on the edge; we were too black to be white, and yet too white to be black. People are now learning that we are still here and getting stronger and louder.

Our collaboration at the Blacktown Native Institutution is an extension of these ideas and is designed to inform, educate, and consolidate our connection to place here, and also to heal.

What can audiences expect from the installation?

Audiences can expect a deepening of knowledge and understanding of what happened at this place. Many will be surprised by the previously untold history of the site as it is widely unknown.

The Blacktown Native Institutution site provides a direct link to many of our Dharug families. It’s the site of the very first stolen generations and was also the start of a huge social experiment initiated by the British government in 1814 to ‘domesticate and tame the wild blacks’, and to indoctrinate them into the ways of the supplanters.

This site is significant for other reasons. The origin of the name ‘Blacktown (the ‘Blacks’ Town’) is the place of the first parcels of land granted back to Aboriginal people in Australia’s history – the Colebee/Nurragingy Land Grant. It’s ironic considering it was stolen land within Colebee’s and Nurragingy’s lifetimes. Colebee and his sister Maria Lock are a direct link to my family.

Much of this history has been hidden and purposely kept secret in a concerted attempt to erase us as a people. ‘Smoothing the dying pillow’, assimilation, and eradication of our culture was very real. The installation aims to activate the site and allow people a close-up and personal view; a chance to hear the sad stories attached to the place, and also learn of the resilience of the Dharug people. It will also allow the participant to become involved in the ongoing and much needed healing of this place.

The theme this year is NIRIN – which means “edge” in the language of the Wiradjuri people of central NSW. What does the theme mean to you?

The theme ‘NIRIN’ is enigmatic and very pertinent for me as a Dharug woman.

As Dharug people, we have been teetering on the ‘edge’ since the British took possession of our lands. We have been on the fringes of society since our people were smashed by invasion, dispossession, and disease. Two thirds of the Dharug population were wiped out in the first three years of the British arriving in Sydney, and the rest of us were deemed an inconvenience, as the theft of vast stretches of farmland and pastures began. The Dharug and others were pushed from their ancestral lands and forced to live on the edges of the new townships, in shanty towns or on missions, and reservations.

The theme seen on a more local level is evident in the history of the actual institute, where parents were only able to see their children once a year on ‘feast days’, held by the Governor to showcase the ‘progress’ of the students. Those parents were still living in the vicinity of the institute, on their ancestral land outside the fences of the institute…on the edge. From then until now, we as Dharug people have had to battle to be seen, and to have our voices heard.

Through your artistic practice you tell ancestral stories and highlight the significance of the land. What do you want audiences to take away from experiencing your work?

I want audiences to know the truth. To be presented with the facts, personal stories, and local anecdotes that tell of events that are undeniable, and irrefutable. Audiences need to see the whole story; the layers of stories of country and not just the convenient, ‘economically viable’ ones. The truth will allow a more comprehensive and honest history of Australia to emerge as Dharug were one of the first people to feel the impact of the invasion.

It is hoped that audiences will understand that if you live here as a resident, you must now take on the role of a custodian too.

I want audiences to connect – not just with the local stories but also with the wisdoms of our Old People. To only take what you need and to care for Country, even though that ‘country’ is now an extensive urban environment. To also make considered and sustainable decisions that take a long term view in governance, and all elements of society, like our Old People did.

Hopefully, audiences will begin to understand that the stories of country are here and always remain, beneath the tar and the concrete, the suburbs, and drains.

The Gulbangali Dharug Nura Project: NIRIN Gathering Day will be happening over two days in June. Register for free below: