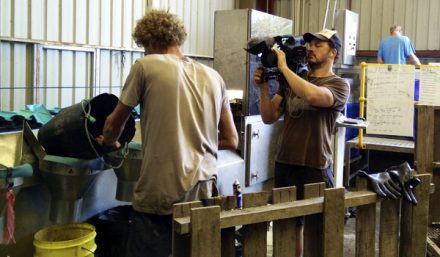 Oyster behind the scenes

Oyster is a feature length documentary that follows a NSW Oyster farmer, his family and the precarious three-year journey it takes to bring his Sydney rock oysters to market. Create NSW spoke with the film’s director Kim Beamish.

How does it feel to have Oyster selected in competition in the Documentary Australia Foundation Award for Australian Documentary at the 65th Sydney Film Festival?

It is great to have Oyster accepted by the Sydney Film Festival, as it is recognition of the work by everyone involved in the film. Pat Fiske, the creative producer, put in so much time and effort making sure that it was the best film we could make. Our amazing editor Denise Haslem, managed to help shape and structure the footage shot over the two years I spent with Dom, Pip and the boys on the farm in Merimbula.

Denise has done a wonderful job in bringing Oyster to the screen and showing the trials and tribulations of being an oyster farmer as the climate is changing in front of everyone’s eyes. Mike Dooley managed to bring much to the film with his music spending many an hour with me and teaching me a fair bit about composition. We were also lucky enough to have Michael Gissing from Digital City Studios – beautifully grading, sound designing and mixing the film.

Most of all, it was Dom and Pip and their two kids Sol and Eddie who gave us so much letting me into their lives with a camera and trusting me from the get go. They have been amazing to spend so much time with and extremely generous.

Oyster is shot in an observational style. Why did you decide to produce the documentary this way?

Many of my favorite films are observational studies of characters or communities and I wanted to explore issues of climate change from a place that all of us could identify with – from a family perspective. I think in many ways; the facts and figures of climate change have become too overwhelming or hard to understand. I wanted to get behind all the scientific mumbo-jumbo and show a family that we could all identify with, dealing with the effects head on. I also thought that the environment Oyster was filmed lent itself to this style of filmmaking and would help to bring the audience into the lives of our characters, and in some way, to let the audience experience what they are going through.

What do you hope the audience will gain from the film?

Pat and I hope that the film will show the fragility of our inland waterways and estuaries – and for that matter, the precariousness of our environment. We hope that an audience may consider their own impact on the environment, such as what they are throwing down the drain and where it might end up. I think it’s also important to see the amount of work that goes into producing our food, especially a luxury item like oysters, and that it could all be gone in a ‘heartbeat’.

It can be quite challenging to finance documentaries in Australia. Can you share with us how you financed this film?

We had support from Screen Australia Producer’s Fund with Producer Equity Program and Create NSW’s development funds. We raised the rest of the budget through a Kickstarter campaign, lots of beer and oyster nights at pubs and restaurants and most importantly, getting tax deductible donations through the Documentary Australia Foundation.

What are you plans for distribution after the Festival?

We plan to get it out in the cinemas through Demand Films. We are working with our supporters to get as many screenings as possible throughout Australia. Check out our new trailer and website: www.oysterfilm.com. We are also working on getting it out in schools, developing educational materials and an interactive website.