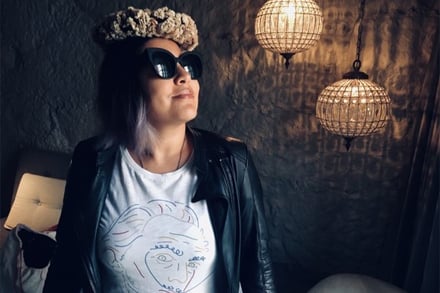 Violeta Ayala is a trail blazing filmmaker, artist and technologist. Her credits include Prison X – The Devil & The Sun, a VR animation set in a Neo Andean Metaverse that premiered at the Sundance Film Festival this year, and the award winning documentaries Cocaine Prison, The Fight, The Bolivian Case and Stolen. We spoke with Violeta about her work and ideas that bring art, screen and technology together, creating new art forms and pushing boundaries hand in hand.

How would you describe your virtual reality piece, Prison X – Chapter 1: The Devil and The Sun?

Prison X is a series of immersive and interactive stories that takes the audience from being just a viewer, to being part of the experience with agency, in a Neo Andean Metaverse. We are creating a new film experience with its own cinematic language, with attributes that are participatory in nature in an open world. The first episode The Devil and The Sun lasts approximately 38 minutes.

We have to make five other episodes that will coexist in a multiuser experience. We are defining the cinema of the future.

The film takes the viewer into the world of a drug mule in San Sebastian Prison in Bolivia and uses devises of magical realism in its storytelling. Does the use of VR for this project help the audience to navigate the different themes and strands of this story?

We have created all the metaverse by hand, digitally and in 3D inside virtual reality. It’s an animation that exists in its own world, it is a meta experience that already brings cinema a little closer to what we are living today, with so many changes that are happening, we are entering Web 3.0, with NFTs as a new form of communication linked to the blockchain changing the internet forever.

I don’t believe, it only helps the audience to navigate different themes but rather this story is experienced in narrative layers of interaction, immersion, that mixes illustration, theatre, animation, music, sound, UX, artificial intelligence, creative coding, cinematography, and more. Art and technology are finally coming hand in hand.

The audience is an integral part of the stories.

On the technical side, how did you finish this project during COVID-19, and what challenges did you have to overcome?

It is interesting because in this way of creation, COVID has perhaps had a positive impact on the project, as so many people’s lives have transitioned online. We can easily work online and create together inside our virtual reality headsets at the same time, we can talk to each other and co-create live, just as you would in a real-life production.

For that reason, I believe there is no going back, to produce in the traditional manner of production, we’ve had until now.

The project had its World Premiere at Sundance Film Festival this year. How was it different to have the work shown in an online festival rather than being physically present for the screenings? How have people reacted to the project?

The festival this year has been a totally different experience. Now that I look back on it, it existed in its own metaverse; obviously we’re in a transition period and in the beginning it was a bit hard not to be there with the audience and not be there talking to my colleagues, hugging friends, and so on. By the last days of Sundance I was singing karaoke, went to the bar and was having deep discussions with old friends and made new friends, all online in the created spaces for the festival, not on Zoom. We were learning to navigate this metaverse (that Sundance created) throughout the festival, which came with a steep learning curve. In that sense it was amazing to be part of the first virtual Sundance. Shari Frillot, Sundance architect is a futurist.

Many more people were also able to experience Prison X, from Tokyo, to Perth, to Mexico City, to La Paz or Johannesburg. By buying a ticket for $25, you were part of this experience. This is mind blowing.

The reception of the critics has been incredible, from Forbes, Indiewire, Art in America, to new publications such as No Proscenium, XR Must, CNET. Kent Bye from Voices of VR, called Prison X, the best non-narrative and most ambitious cinematic experience of the festival. In Prison X we’ve been able to marry immersion and interaction, which hasn’t really been done before. The response from the audience has been amazing, we sparked such a response from around the world and that’s the point, to wake up critical thinking.

A lot of discussion around VR is that it can create a more empathetic space to explore themes. Is this something that attracts you to tell your stories this way, say over a documentary?

The two mediums are completely different and it’s not a case of one over the other. The possibilities of this more experiential cinema are endless. I believe that each medium has its time and place.

We are also going to start creating documentaries in virtual reality and I am not saying this specifically for ourselves but for everyone in this new world that we are entering.

We’re in the middle of a renaissance of cinema, art and communication in general. We are creating a new cinematographic language and a different way to experience cinema. The internet is still in its infancy. We are in a process of (r)evolution that is happening at this very moment in an accelerated way, so it will take some time to change the chip in our heads. Remember there are more people native to digital technologies today than those who are not.

This year the theme for International Women’s Day is #ChoosetoChallenge – what do you think we can do collectively, to help create a more gender equal world?

I think the challenge is more structural, starting from kindergarten when children are young. Girls and boys in Australia are not encouraged to play together, in fact it’s the opposite. How can we accept the old saying, “boys will be boys”?

The power structure that we live of the established patriarchy, not only starts with gender oppression but also racial oppression, and I believe we need to change those structures because there is no magical formula it’s a process and has to start at the beginning.

We live in a colonialist patriarchy.

We also have to think about people with disabilities, in a world that’s been designed for able-bodied people, and exclusively for white hetero-normative rules of engagement where women are seen as primary carers and givers and men as creators. The challenge is to change these outdated structural models that impact negatively on the education of children. We have to imagine the future that we want to build, understanding and acknowledge the history of oppression. Women have to design our own computers and programs. We have to own our informatic languages to understand a computer because if you see most of the computer programs nowadays including Unity, Unreal Engine, Adobe; they’re all programs made by men with a very masculine design.

I challenge the film, art, tech and all funding bodies to allow us as women to experiment and be the architects and engineers of our future.

The imbalance starts from the moment a girl is born.

As a pioneer in the field of Virtual Reality what excites you most about the medium, where is it headed, and what advice would you give to other women thinking about getting into the industry?

I am a little sceptical to give advice, but I think we have to live this moment as a fourth industrial revolution and virtual reality is going to be used in two ways; first during this time of transition, as a virtual film set to record stories as we’ve already seen in The Mandalorian and the other way is what we are doing in Prison X, exploring the possibilities of this metaverse for the audience to have a truly personal experience as their capabilities to affect the narrative are borne out.

We in a moment where all possibilities are open, where the only certainty is that everything is changing, I think it’s key to understand the historical moment we are living, to fully immerse ourselves in designing our future.

When and where can Australian audiences see the Prison X – Chapter 1: The Devil and The Sun?

The audience in Australia was able to experience Prison X during Sundance. We are still in beta testing, and that means we are still working on the transitions and optimisation. But we have surprises coming in Brisbane and Sydney soon and festivals around the world.

The good thing is that there is not a gatekeeper to reach our audience; we’re building our own platform. We will also have studio visits in the second half of the year.

And finally, what’s next for you?

We have to create the other five episodes. I have to re-work the script based on what I learnt in the first episode.

We are editing La Lucha, which is the feature documentary about the fight of people with disability.

We are also developing another project called Showekon, which is for young people, about endangered animals in the Amazon and Australia, we will produce it in virtual reality but release it also on flat screens. We need to stop humanising animals and rather respect them and understand that we live in a pluriverse.

We are building a gallery and a cinema in Web XR. I guess everyone is redesigning their websites to be more responsive and work in all the different platforms.

We are also committed to wake up the social conscience in Sydney using AR with short film, animation and music.

We have a unique opportunity here in NSW to create and build a more equitable future and it’s in our hands.