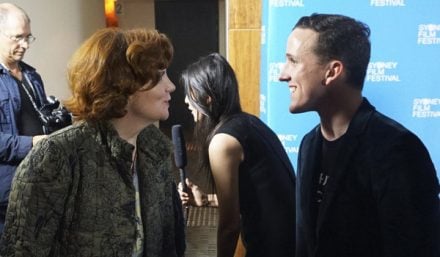 This year Sydney Film Festival presents the return of Festival favourite, Screenability, a platform for screen practitioners with disability leading the narrative, in partnership with Create NSW and the NSW Department of Family and Community Services. This international program showcases the best of 2018, spanning drama and documentary from NSW, Israel and the UK, offering insights and unique perspectives on life. Ahead of Screenability, we spoke to the Guest Programmer, Sofya Gollan.

Last year Screenability became one of the hot tickets for the Festival with many sessions selling out. Why do you think there was so much interest?

I believe a key attraction was that a key creative (writer/director or producer) of each film had to identify as having disability and be intent on pursuing a career in the industry. It was really clear from films being submitted that there was a hunger to tell authentic stories, which were not gaining a platform elsewhere.

Disability is more present in most people lives than they realise. It might not be themselves but a family member who may have disability, a friend, a work colleague or a sweetheart -and seeing these films is an opportunity to gain a deeper understanding of the experiences that people they know or love better.

The Screenability Sydney Film Festival Opening Night will be held on Thursday 14 June at 6:30pm at Hoyts Entertainment Quarter. It will be the World Premiere screening of three exciting new NSW-made short films made possible through the Create NSW Screenability Filmmakers Fund. Can you tell us about the significance of the fund and having these three NSW made shorts opening the program?

Filmmakers with disability are underrepresented in the industry – especially in key creative roles. With the Screenability Filmmakers Fund Create NSW wanted to provide the opportunity for filmmakers to make a world-class short films in line with their peers.

It has been a learning curve in terms of getting the message out there that this is a professional opportunity for those with a desire to create stories in the long term. And that means recognising that disability is a significant barrier in gaining the experience needed to make a world-class short film. As a result, I am thrilled we will screen Samia Halabi’s Tip Of My Tongue, Dieter Knierem’s Intimate Encounters 20 Years On and Daniel Monks’ Broken on the program’s Opening Night.

To be selected to screen at Sydney Film Festival in Screenability, the story, and world of the short film had to be compelling. We were fortunate to receive a number of projects that spoke to that standard.

This year’s program showcases the best of 2018, spanning drama and documentary from Australia, Israel, Austria and the UK. Can you us tell us how you chose this program?

I wanted to be entertained and moved – that was really important. Going to the cinema still needs to have that special experience –  sitting in the dark, watching a film that takes you elsewhere, and that tells you something new. I was also seeking out a range of stories and this year we have two films by deaf filmmakers – I was conscious they were not represented last year – To Know Him and The Sign For Love they are fantastic stories that resonated very strongly with me.

In 2018 we’ve seen a bit of a shift in the visibility of people with disability on screen, for example through the ABC series Employable Me. Do you think things are changing, and what needs to happen?

We need more filmmakers with disability being in charge of the disability narrative. They are best placed to be that authentic voice. I believe as a creator, our own lives tend to influence how stories are told in the most profound way – how else to explain that certain severity of Middle Eastern films against that of the wintry, dry wit of Finnish cinema? Each culture has its own stamp and that is true of the disability arts community. It influences and shapes world views just as much as national culture does.

For filmmakers without disability, how can they best represent people with disability in their projects, so they don’t just end up being tokenistic?

There is a very definite culture at play within disability circles and it does take lived experience, whether you have a disability, a family member or work within disability, to understand what makes for an authentic telling. I would include independent consultation – it’s not enough to cast disabled actors in the role and expect them to also be the expert, you still need that independent voice that can advise when prejudices and assumptions are getting in the way of authenticity. It is pertinent to make the comparison, ‘would you make an Indigenous narrative without Indigenous talent involved?’. That consideration for disability should be accorded the same respect.

What advice you have for emerging practitioners with disability in the industry?

Pick up a smartphone and make something, if you have no access to people or equipment. Start small. Make a lot. The more you do, the more you get it. It’s also about networking to get the best talent and collaborators for the budget you have; making decisions how best to use your time and resources to serve the story; and you will start to attract people who will want to work with you and take you to the next level. And be a polite, hardworking collaborator and you will find people will want to work with you again.