NITV’s Julie Nimmo shares the importance this year’s NAIDOC Week theme ‘Because of Her, We Can!’ 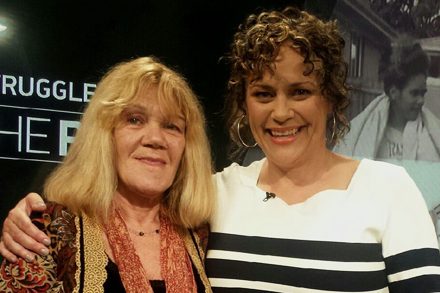 Julie Nimmo, Supervising Producer at NITV, is a Wiradjuri woman from Sydney, NSW. Julie has over 20 years’ experience in Broadcast TV as a journalist, documentary filmmaker, and factual content producer of live programs, cultural content and television commercials. Julie is also the first Aboriginal woman to win a coveted Walkley Award, and last year Julie hosted and executive produced the highest rating NITV program in 2017, Struggle Street: The Point Responds.

Ahead of the NITV NAIDOC Awards Live Friday 13th July, Create NSW spoke to Julie Nimmo about her thoughts on this year’s NAIDOC Week theme, Because of Her, We Can!

Can you tell us about yourself and where you’re from?
My name is Julie Nimmo, I identify through my grandmother who was Wiradjuri, born on Warengesda Mission, Narrandera NSW and who raised and educated her two daughters in Sydney. I have been lucky enough to make content since the mid 90s. Through my job, I’ve had the privilege of speaking to the most incredibly wise, creative, cultured people imaginable.

This year’s NAIDOC Week theme is Because of Her, We Can! Can you tell us what it means to you?
Because of Her, We Can! created for me an opportunity to reflect and feel gratitude for women who have lived, loved and fought for all of us to enjoy what we have, as well as appreciating those who have inspired us to agitate for rights, not yet realised. Personally, I’ve stopped to image other women’s challenges, triumphs, traumas and resilience. It’s been a time of learning and awakening for me.

This year’s NAIDOC Week theme promotes Aboriginal and Torres Strait Islander women as role models in our communities. Could you tell us about a woman who has influenced you in your life?
My older cousin Terri is someone I absolutely looked up to as a kid because she is so supremely confident and happy. No matter what the drama has ever been in my family, my cousin can always find something to laugh about, and she has a really big laugh which makes everyone stop and look at her and that in itself breaks the tension. Even if it’s us saying ‘oh go away’ we still all laugh. Laughter is so precious, which my cousin gives away as much as she can, and I love her dearly for this.

What advice would you give to a young Aboriginal person looking to kick off their screen career?
Commit to your ideas and don’t let anyone pull you off your own course. Whatever your destiny is and whatever the stories are that burn away inside you, treasure that creativity, because the world needs to hear from you. So love yourself, talk your ideas out with people you trust and keep pushing on until the world catches up with you!

Which NITV programs are you most looking forward to during NAIDOC Week and why?
NITV has a stunning documentary coming up called The Song Keepers Broadcast Sunday 15th July at 8.30pm. The film explores how in remote Central Australia, a musical legacy of ancient Aboriginal languages, sacred poetry and baroque music is being preserved by several generations of women.

This unique ensemble embarks on a historic tour of Germany to take back hymns that were given to their great grandparents by German missionaries. The group sings sacred music in Arrarnta and Pitjantjatjara languages, two living Aboriginal languages of the Northern Territory and South Australia. More here: https://bit.ly/2u4zJ9K

What’s next for you?
I am producing the NITV NAIDOC Awards Live on Friday 13th July. I am terrified of the enormity of a three-hour live program, but I’m always thrilled to have challenges in life as the great lessons are always learned on the ‘big jobs’.

Find a NAIDOC Week event near you: https://www.naidoc.org.au/