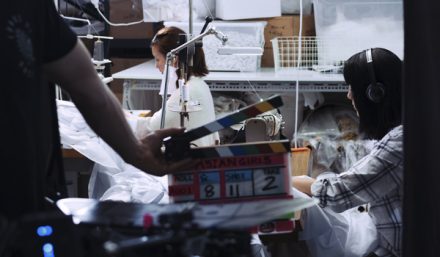 Asian Girls behind the scenes

Asian Girls tells the story of Chan, a Chinese factory worker who lives alone. Every night she is visited by a horrific ghost who has an uncanny resemblance to her foreign neighbour. The film was funded through Create NSW’s Emerging Filmmakers Fund and will have its Australian Premiere, screening in competition at the Dendy Awards for Australian Short Films at the 65th Sydney Film Festival.

How does it feel to have your film Asian Girls selected in competition in the Dendy Awards for Australian Short Films category at this year’s Sydney Film Festival?

It’s really cool! I honestly didn’t expect it because I thought Asian Girls was a bit too weird.

In terms of tone and genre, what were you aiming to create with this film?

We referenced Asian horror films, especially iconic ones from Korea and Japan. We wanted to make something genuinely scary, though I think the film is more creepy than scary. It’s definitely disturbing and gross.

The film was successful in its application to Create NSW’s Emerging Filmmaker Fund; what made you decide to apply for this funding?

In the year that we applied, the Emerging Filmmakers Fund had an emphasis on supporting projects that were female-led and culturally diverse. With a film called Asian Girls, we felt we were cut out for it.

How did you make your application stand out?

We submitted more materials than what was asked for to show we were serious. And then we frantically designed and printed a slick little look book in time for the interview when we were shortlisted for the fund. There was a two-day turnaround on that look book because we were only given that much notice at that stage.

As an emerging filmmaker what have you learnt from the experience of making this film?

I learnt that as difficult as filmmaking is, it’s not as freakishly hard as people say. It made me feel like making a feature film was achievable, though maybe that’s naive emerging filmmaker optimism, and I won’t feel the same way after I’ve tried making a feature. The point is, everyone should chase their dreams and not listen to anyone that tries to stop them.

After Sydney Film Festival what plans do you have for the film’s distribution?

We want to release online as soon as possible and we’ll probably do that after a few more festivals.