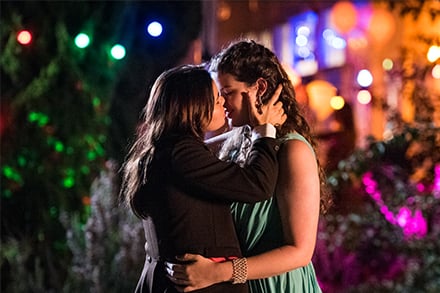 Screen NSW spoke with Mardi Gras Film Festival Director, Lisa Rose, about the upcoming festival and what films, events and masterclasses you should not miss.

There is such a wide and diverse array of films being showcased at the festival this year. How do you and your team plan such diverse content?

The festival is founded upon the key values of diversity, inclusivity and creativity. Considering these principles is an essential factor in programming the festival line-up. Film selection is crucial, as we must highlight essential local and international queer cinema, while also providing our multicultural audience with a broad selection of films.

You’ve also got a few NSW-made films in the mix. Can you tell us about them?

Unsound is another world premiere from director Ian Watson and producer Tsu Shan Chambers. The film is quite a unique story about a deaf trans man.

We have a whole bunch of NSW filmmakers competing in My Queer Career, Australia’s richest prize for LGBTIQ+ short films. We also have an Australian Episodic Showcase that is featuring the world premieres of the first seasons of two locally produced episodics – the dark comedy Without a Tracey and pansexual romance Cloudy River.

Out Here Shorts is three 22-minute documentaries that focus on Australian rural LGBTIQ+ stories and comes from a few local NSW filmmakers.

Sequin in a Blueroom from AFTRS student Samuel Van Grinsven had its world premiere at Sydney Film Festival in 2019, and will finish up its festival run with a screening with us, after being a recipient of Queer Screen’s Completion Fund last year.

And please tell us about the networking events on offer this year.

In coalition with UTS (Faculty of Arts and Social Sciences) the Festival is hosting a networking opportunity for Queer filmmakers to engage with industry peers with varying levels of experience. This free event will be held from 7:00pm, Tuesday 18 February at Set Bar (Event Cinemas, George Street).

We also have a free filmmaking masterclass with visiting Chilean filmmaker Omar Zúñiga who is here to present his film Los Fuertes. The masterclass will focus on what it takes to direct a personal story and is on Sunday 23 February.

The festival has seen significant growth over the years. Tell us more about the journey towards your 27th year, and the role, support or mentoring from other festivals has played in that ride.

Across our 27-year history we have received international acclaim and regard for our creation, selection, and endorsement of critical and valuable queer cinema.

Our growth over the prior decade has been quite significant. Two previous key employees Paul Struthers and James Woolley left quite a legacy and brought a wealth of professional festival experience from their work with Sydney Film Festival and they have both gone on to work at Frameline in San Francisco, the world’s largest LGBTIQ+ film festival.

Nurturing relationships and sharing knowledge with our sister festivals in Melbourne and Brisbane and internationally through the Asia Pacific Queer Film Festival Alliance and various other networks is vital in assisting to meet the modern day demands for film festivals.

What do you personally envision for the future of the festival?

In future festivals we will continue to showcase, support, and highlight queer creativity through film.  With a focus on elevating new and exciting voices and artists presenting authentic LGBTIQ+ work.  Bringing new audiences in to witness the evolution of queer film is vital.