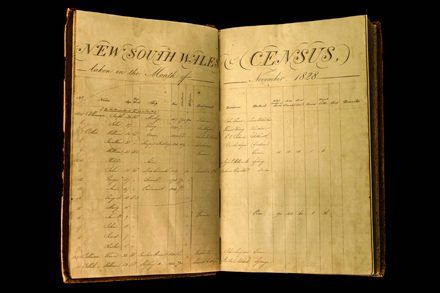 Australia’s first ever recorded Census (1828), the Harriet and Helena Scott Collection of meticulous scientific butterfly and moth artworks (1850) and Ethel Turner’s handwritten Seven Little Australians manuscript (1893) are amongst eleven items and collections today inscribed into the UNESCO Australian Memory of the World Register at a ceremony hosted by the State Library of NSW.

“From the most important Census ever conducted in NSW, to a unique study of natural history and a manuscript from one of the country’s most beloved children’s authors, each of these records is a valuable part of Australia’s enduring history,” he said.

The Census, which will soon tour NSW, is the first and most detailed ever taken in the State, and the only surviving of its kind. The 1828 Census is a fundamental resource from the State Archives Collection that continues to prove its value 190 years later.

“The Scott sisters were incredibly talented and determined to make a difference. They were prohibited from studying at Sydney University because of their gender and yet their work was so remarkable that their 150-year-old illustrations are still used by scientists today,” she said.

According to State Librarian John Vallance, “Ethel Turner gave many young readers a first authentic portrayal of everyday urban life in Australia. It is rare for manuscripts of works such as this to survive, and we are delighted that UNESCO has decided to recognise this unique part of our literary history in such an imaginative way.”

“Visitors will be able to see the Seven Little Australians manuscript not only on the Library’s website, but in person as part of our special UNESCO exhibition which is open until the 5th May,” said Dr Vallance.

A total of nine assets from NSW were inscribed at the ceremony, including papers from diarist Annabella Boswell (Port Macquarie Historical Society), WW1 slides (Tamworth Regional Film and Sound Archive) and archives from the Lithgow Small Arms Factory Museum.

The 1828 Census was the first official census undertaken by NSW after it was found the Governor had no authority to compel free men to come to a muster – the previous means of counting the colony’s population.

The Census is iconic material from the State Archives Collection. It covers some 36,500 inhabitants, both convict and free, and captures a social and economic picture of the Colony of NSW in November 1828, 40 years after the Colony’s establishment. It covers all settlements within the jurisdiction of the then colony of NSW including Moreton Bay and Norfolk Island.

It records such detailed information for each person (including children) as name, age, if free or convict, if born in the colony or ship and year of arrival, sentence if arrived as a convict, religion, employment, residence, district, total number of acres, acres cleared, acres cultivated, horses, horned cattle, sheep, and remarks.

The core records of the Census are available to view at the NSW State Archives website, with a regional NSW tour visiting Port Macquarie, Bathurst, Tuggerah, Goulburn and Shellharbour planned across 11 April – 29 May. For more information on the Census and tour, visit here.

About the Harriet and Helena Scott Lepidoptera Collection (1850)

The Harriet and Helena Scott Lepidoptera collection is a unique documentary archive of the scientific ambitions and artworks of two extraordinary nineteenth-century Australian natural history illustrators. Working together with their father, Alexander Walker Scott, on isolated Ash Island in the Hunter River near Newcastle from 1846 to 1866, the two sisters collected and cared for insect specimens, documented their transformation and produced over one hundred stunning artworks of Australian butterflies and moths.

The archive was sold to the Australian Museum in 1885 and it is a complete record of their project including notebooks, manuscripts, sketches and drawings, the final finely-detailed watercolour paintings and correspondence and production records of their 50-year effort to get their work published and recognized.

The Collection is unique for its combination of detailed documentation of natural history practice and products; close association with place and time; scientifically useful biological content; completeness; artistry and beauty; artistic ambition and innovations in natural history art; and for its documentation of two women’s sustained efforts to be recognized as an integral part of Australia’s great nineteenth-century natural history project to classify, document and understand this ‘new’ land.

For access to the full Australian Museum Lepidoptera painting archive of 100+ artworks plus captions, download the Scott Sisters – The Art of Science app.

About the Seven Little Australians 1893 manuscript

Written in the author’s hand, it is rare for the original manuscript of a 19th century novel to survive, especially for a literary work as significant as Seven Little Australians.

Up until this point, Australian children were predominantly reading books from the UK stereotypically set on sheep or cattle stations, with boys as the primary characters. Seven Little Australians was the first Australian children’s book to feature a girl as its hero and, consequently, contributed to the foundation of girls’ literature in Australia. Significantly, Seven Little Australians predates landmark books by A.B. Paterson and Henry Lawson, and Miles Franklin’s My Brilliant Career.

The complete original manuscript has been digitised, with free public access provided to the full text of the manuscript via the State Library of New South Wales catalogue here.