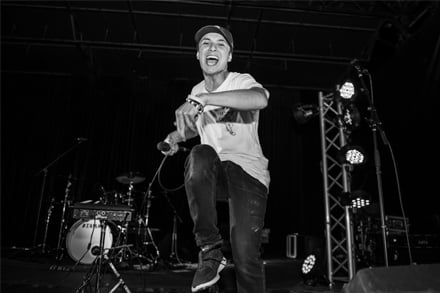 Hip-hop artist DOBBY talks about his experiences of being part of the 4ESydney HipHop Festival for the 22nd Biennale of Sydney, and the new project he is working on, Warrangu; River Story.

What is the significance for you of being part of 4ESydney HipHop Festival for this year’s Biennale, the first under the direction of Brook Andrew?

It is an honour and a pleasure to be a part of a team collaboration such as 4ESydney and the Biennale! We are making great strides towards bringing the power and knowledge of Hip-hop culture to a broader audience with every year. This is yet another link in the chain of some very important collaborations that will shed some much-needed light on our amazing talented youth!

Can you tell us a bit about what you have in store for Biennale?

I will perform my work WARRANGU; River Story, a collection of stories and recordings about the three rivers that form the tribal boundaries of Brewarrina, North West NSW. It is an amalgamation of hip-hop and classical music with some influences of country and folk music.

The story follows a First Nations perspective of the philosophy and interconnectivity of these rivers; just as relevant considering the devastation of the water theft and bushfires that have ravaged small towns and First Nations communities.

Do you think hip-hop is a powerful tool that other genres can’t achieve?

Hip-hop music speaks directly to our young people. In all respects to other genres, I believe that hip-hop, and hip-hop culture, is the most impactful platform for musicians to learn, educate, and directly address the injustices in our country without censorship. It leaves no room for ambiguity, no question of doubt, or indifference. It is a force to be reckoned with.

You recently travelled home to Brewarrina in north west New South Wales to connect to your family’s history in River Story. Can you tell us about that?

I met with Brad Steadman, a Ngemba man with extensive cultural knowledge of the land, and its languages. I wanted to write this project about Brewarrina, my family here, and my connection to this place. He naturally became a mentor for me throughout the project.

Brad took me to the Bogari (Bogan River) in Gongolgon, NSW, just under an hour south of Brewarrina and expressed to me the ebbs and flows of the land as we walked through the dry riverbed. His lesson is one of interconnectivity and feeling one part of an independent yet interdependent water system.

And have you incorporated your history into your music?

Yes, or at least I’m really trying to! I think I have a great platform to integrate elements of language, knowledge, and culture of the land and waterways. Warrangu; River Story brings all this knowledge to the forefront, and hopefully I’ve done it some justice.

What are you listening to and who are your influences?