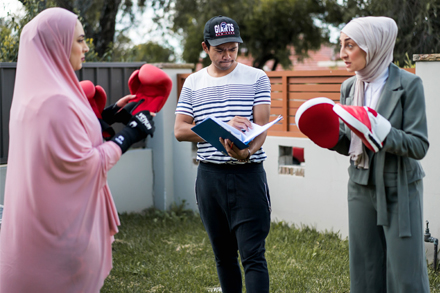 Halal Gurls is a 6 x 6-minute comedy online series that offers a candid look into the lives of three 20-something Hijabis, living in Bankstown, as they endure the unseen everyday culture clash between their faith and desire. We spoke to series creator Vonne Patiag to learn more about the series.

Halal Gurls has reached over 500,000 views on YouTube. Its success proves audiences are craving authentic and diverse stories. Why do you think it’s been so successful?

We partnered with established filmmakers who shared great insights into what makes a show resonate, and worked with a great executive team at ABC, who specialise in long-form content. Also, our script editor Greg Waters, challenged us to craft the best scripts we could, and ensured our storylines and character beats weren’t hindered by the shortform running time.

And what was your marketing strategy?

We ran a targeted social media campaign across Facebook and Instagram to reach international viewers, ahead of the series global release on ABC’s Comedy YouTube channel. Since then we’ve seen exponential growth in views, especially among the Muslim youth diaspora in Australia, and across the world.

Halal Gurls found a natural audience online that continues to grow. If you write an inclusive story, audiences will feel naturally included.

You created, wrote, produced and co-directed the series. How did the concept come about?

I came up with the concept after spending some time working in Hijab House, one of the world’s leading modest fashion brands, which a close friend runs. There were dozens of Hijabis doing customer service training at that time and we would spend our lunch breaks together. I was so amazed with what I would see – these women were the funniest and most resilient people!

This got me thinking about how Muslim women were being portrayed on Australian screens – most often as victims who would be crying in these stark dramas. I would talk to these women, who would often tell me they had no interest watching shows with Muslim characters, because it didn’t really feel like their story. So, I knew a comedy had to be made about Hijabis living their best lives, just as these real women were.

From there we crafted the show to focus on everyday elements of these women’s lives like ambition, careers and love – to show there is more to a Muslim woman than her religious identity – and it’s humbling to see so many people tell us that they really feel seen in their everyday lives.

It’s been fascinating to track the response of the series. As the first Hijabi comedy series in the world, we expected a lot of fanfare but also a lot of backlash, which we’ve received from local viewers. Luckily, we have received more love for the series, especially from international viewers.

Halal Gurls was funded through the Digital First Comedy Initiative which is a partnership between Create NSW and the ABC. Why did you think it is important that these kinds of initiatives are important?

It’s so important for these initiatives to continue because they are great training grounds for practitioners to take the next steps in their careers. Prior to this, I had only worked in short films, but through Halal Gurls, I now have a solid broadcast credit and was able to practice my show-running skills, which I’m taking into my next projects.

These initiatives are also important because they allow different types of creatives to get their projects up. We often talk about diversity onscreen but having more perspectives behind the camera – in key creative roles – only strengthens the diversity of the industry.

Halal Gurls proves there is an audience who want engaging stories about Muslim Australian experiences. How do we give them what they want?

I think the best way to engage diverse audiences is to empower the right people to tell their own stories. A great story, told with personal truth and conviction, will always be more effective in engaging an audience than a strategic diversity play. I could never imagine producing Halal Gurls without the team we assembled. And we really wanted to create a platform for these women to tell the stories they wanted to see.

If you’re inclusive in your process, you include the audience in the conversation, and that’s vital in empowering both sides of the screen.

Find out what all the buzz is about and catch Halal Gurls on ABC iview and YouTube.