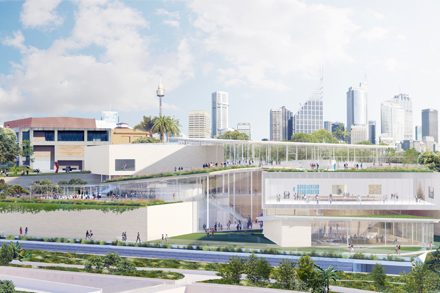 Construction of the new building, designed by Pritzker Prize-winning architects, SANAA, will commence in early 2019 resulting in a spectacular near doubling of the exhibition space of the Gallery.

Due for completion in time for the Gallery’s 150th anniversary in 2021, a comprehensive consultation process has cleared the way for construction.

This approval paves the way for the Gallery to become one of the world’s great art museums increasing visitation to an expected two million people a year.

Community feedback has played a vital role in finalising this project. The Green Building Council of Australia has awarded the project a 6-star Green Star design rating – the only art museum to achieve this in Australia.

The Sydney Modern Project is set to inject over $1 billion into the NSW economy over 25 years and double the number of visitors to the Art Gallery of NSW.

As well as welcoming visiting exhibitions, the Sydney Modern Project will expand the Gallery’s display of Aboriginal and Torres Strait Islander artworks with indigenous art the first to be encountered when entering the new building. The project will better link the Gallery with the adjacent Royal Botanic Garden, and a public Art Garden featuring art commissions from national and international artists will connect the Gallery’s new and existing buildings.