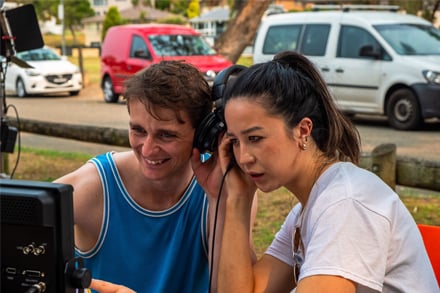 Triple threat Adam Bowes co-wrote, co-directed, and takes the lead role in his short film Diving In. Ahead of the World Premiere of Diving In at Sydney Film Festival we spoke to Adam about making the film.

How does it feel to be part of the first virtual edition of the Sydney Film Festival?

It’s certainly been a wild journey. We were in the middle of post-production when COVID-19 hit, and at that time we weren’t sure if the festival would go ahead this year. However, I had many conversations over Zoom with my co-writer and co-director Nina Oyama, and we continued to perfect our film and work hard to deliver it in time for the Screenability program.

And the film will also screen as part of We Are One: A Global Film Festival!

Towards the end of the post-production process, Sydney Film Festival told us that Diving In was also selected to screen as part of We Are One: A Global Film Festival. We are incredibly grateful and so excited that we still get to show Diving In to so many people. I feel overwhelmed to be in the company of the other two incredible Screenability films, as well as so many wonderful festivals around the world!

You co-wrote and co-directed the film with Nina Oyama. How did this collaboration come about?

I had an absolute blast working with Nina in the past, so we caught up over a coffee in August last year and started spit balling ideas for our next project. We started working on a proof of concept for a short form web-series, and it was around that time that we heard about the Screenability initiative, so we decided to retool our idea and make Diving In a short film.

What other projects have you collaborated on?

Nina and I met a few years ago after Nina saw me in Jeremy the Dud, another short film I worked on with Robot Army Productions. Nina asked if I would be interested in guest starring in a Fresh Blood project for the ABC called The Angus Project.

While filming The Angus Project I mentioned to Nina some of the issues I had been having with the National Disability Insurance Scheme (NDIS). Nina approached me a few months after filming, remembering my initial struggles with the NDIS, and asked if I’d like to do a sketch entitled NDIS Fails on Tonightly with Tom Ballard, which we ended up writing together.

In addition to co-writing and co-directing Diving In, you also star in the film as lead character Alex. What motivated you to take on multiple roles and how did you find the experience?

As an actor it’s incredibly important not to wait around for auditions. You need to keep the creativity flowing and write and produce your own work.

Initially for Diving In I was only going to be a co-writer and lead actor. I’ve always admired people who direct and act in their own shows and, after speaking to Nina about other roles, I decided to also co-direct. Nina is one of those people who can take on many roles in a production, having directed, and acted, in The Angus Project. And I absolutely loved co-directing, co-writing and acting in the film.

Many of the sequences in the film are beautifully stylised, for example, the sequence when Alex is trying to retrieve Jen’s phone. Can you tell us about the kinds of conversations you had with your Director of Photography (DOP) to achieve this?

Our DOP, Carina Burke, and underwater DOP, Dean Cropp, were both amazing. Early in development we met with Carina and discussed the action and aesthetic for the shots. She knew the tone we were going for and we just clicked from the get-go.

For the action sequences our main reference was Saving Private Ryan. It sounds funny to have a comedy set in a pool, inspired by such a big wartime blockbuster, however, we wanted to convey a sense of life and death for my character, Alex ­- even though all he was doing was trying to retrieve a phone. For his character the stakes are incredibly high. We also utilised my gymnastics skills to do my own stunts in the film, and Carina was pushed along using my wheelchair to create the smooth and seamless look of our action scene.

For underwater sequences we were inspired by the cinematography in ABC’s Barracuda and that helped make Alex look graceful in the water.

Has making this film given you any ideas about where you would like to take your career next? Is there potential for this short to be a pilot?

I have loved being a part of the creative process for Diving In. When we started writing the project as a web series, we had so many ideas revolving around my time as a swimmer. There were so many wonderful and hilarious experiences that I’d had when I was competing, particularly at the Youth Paralympic Games. From the friendships I’d made at swimming clubs, and the plethora of stories from sports camps, I could certainly make Diving In a starting point for future projects.

What did you think of the Screenability initiative and what else do you think needs to be done to give a voice and empower screen practitioners with disability?

I believe authentic representation is incredibly important and there needs to be more of it. There is an incredible sense of joy that is felt when seeing someone that looks like you on TV or in a film and knowing that you’re not alone. It’s fantastic to be a part of Screenability and I can’t wait to see the other two films.

Set in 2007, a young amputee swimmer Alex has his heart set on one of the coaches at the local pool. After accidentally rejecting her, Alex’s friends steal his phone and send her a raunchy text message. Mortified, Alex must get to her phone before she sees the message, or risk losing her forever.