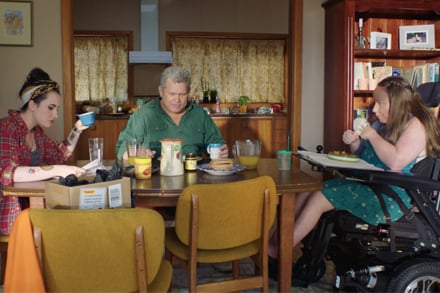 Writer and actor Emily Dash delved into writing her first solo short film script for her new film Groundhog Night, uncovering the interesting and often-hilarious impact that living with a disability can have, not only on an individual, but on their family, and society at large. Emily shares her experiences writing the film, ahead of its World Premiere at the 67th Sydney Film Festival.

How does it feel to be part of the first film festival to go world-wide with the digital initiative, We are One: A Global Film Festival?

Being part of the Sydney Film Festival is a dream come true, particularly because this is the first narrative film I’ve written by myself. It’s pretty magical for it to be recognised in this way and for it to have that international reach with We Are One.

You wrote the script for Groundhog Night. Can you tell us about how the idea came about and why you thought it was an important story to bring to the screen?

I was really interested in looking at the funny side of disability and how it can impact on the family.  A lot of the things that you see in the film have either happened to me or people have said to me, including the ending.  It’s not a true story, but it’s a very real story. I describe it as a love letter to my family and our dynamics – and to my grandparents, who are the opposite of the characters, Rose and Ralph.

What discussions did you have with Groundhog Night’s Director Genevieve Clay-Smith in pre-production about the world and characters envisioned in this story? Was the result what you expected?

I was pretty clear from the start that I wanted Gen to direct, and she was always really passionate about bringing the story and its world to life, in the best way possible. She was receptive to my vision. We talked a lot about the rich and multifaceted journeys these characters would go on – understanding who they were, how to represent them, and the tone. Groundhog Night is a comedy and a drama. We wanted it to feel very honest, real, and raw, given what they’re dealing with.

You also star in the film as Jess. What attracted you to play this role, and what was it like working with the other cast members?

I wanted to play Jess because these characters are close to my heart and my life – it made sense. And interacting with the other characters opened up the story, which became something bigger than it ever was in my head.

I was so lucky with the cast and crew. I was amazed that such talented wonderful people were so generous with my film. Watching Robyn, John, Susan, Gen, and Chris work was honestly a sight to behold.

Gen – she’s a fabulous director and a truly phenomenal actor as well. I was excited to give her the opportunity and hope we can see more of that. Our chemistry as friends really translated.

While you were writing Groundhog Night you were mentored by Writer Becca Johnstone. What did you gain from the experience?

It was great to have Becca as a second set of eyes, to make sure everything made sense, and would play well on screen. The most helpful thing I learned was about the comedic beats – getting as much humour as I could out of the funny moments, while making sure the film had a real balance of light and dark.

In Groundhog Night, you challenge many stereotypes about what it’s like to live with disability. For example, the film challenges ideas around sexuality and educational opportunities. What do you hope the film will achieve in this context?

You can communicate so much with film, and importantly, it can be done in a way that is challenging but not overly threatening or alienating. We live in a media-saturated world, so we need to take advantage of the opportunity for authentic representation and casting. I hope the film opens people’s eyes to things they might not have considered before. I also hope that people with disability see and hear themselves within it – and that it might spark future creative possibilities for someone.

Gary’s so used to caring for his daughter with disability Jess, he can do it in his sleep. But when the in-laws come to stay, everyone will get a wake-up call.