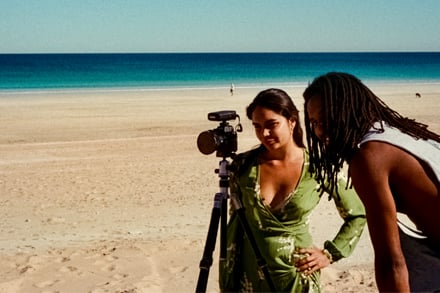 Since completing her Emerging Producer Placement (EPP) with Screen NSW in 2019 Marlikka Perdrisat has gone on to work for Bunya Productions on its highly acclaimed series Mystery Road. We spoke to Marlikka about her recent experience working on Season 2 of the series and to learn her pathway into the industry.

You recently worked Mystery Road Season 2. Can you tell us about the experience?

While working on Mystery Road I was part of the production team, this was a great way to see how the highly successful Bunya Productions team operates. Working in remote Australia creates an additional level of stress, which forces creatives involved to be flexible and adapt to a range of scenarios you don’t face in production in major cities, like Sydney. I found this experience invaluable, not only did I learn so much, but it allowed me to develop my confidence and expand my network.

Last year you took part in Screen NSW’s Emerging Producer Placement (EPP) initiative that gives emerging producers the opportunity to undertake customised six-month paid internships in industry. Can you tell us why you wanted to take part in the internship?

I became interested in film production in my mid-twenties and my previous experience was so varied making it harder to gain experience. The EPP allowed me to gain insight into the grant writing, how the grants are assessed, and how funding bodies are involved in the film from beginning to end.

How has it benefited your career?

It gave me a lot of confidence, has boosted my resume, and resulted in me ending up at the Berlinale, and I highly recommended it to anyone wanting to understand these processes.

Since attaining the EPP I have been involved in various film projects and also become a co-chair of Beyond Empathy.

What advice would you give women wanting to do the same?

I think that my advice is not gender specific. Find what you value and trust your intuition to make the most out of your time in this form, everyone has different values, which creates different goals and ideas of success. It is up to you to decide how you want to define success and how you want to achieve it.

As you mentioned you are a director on the board of the organisation Beyond Empathy, which focus on making society more resilient through creativity. Can you tell us how you came to be involved and why it was important for you to do so?

Beyond Empathy contacted me when they found out that I was participating in the EPP. I had an interview with them and started as a director. At the most recent meeting it was decided that I would step up into the position of co-chair.

The role is highly valuable to me as Beyond Empathy works with a lot of disadvantaged groups, and I think it is really important to help these groups tell their story, their way. I grew up in a remote community, I understand the pressures some of these communities are facing, and before entering producing I worked with a young women’s development program in the Kimberley, and it was there I experienced how these opportunities can influence a young person’s life.

I have a passion for documentary storytelling, giving a voice to young people, and nature. However, in reality my next step is for me is to complete my Juris Doctor of Law. I have one year left and will be dabbling in film on the side until it’s finished.

For me I believe we need to remove the social concept of othering; othering a minority group such as Aboriginal people, women, differently abled people, or people that identify as LGBTIQ+ will allow us to dissolve the social hierarchy that oppresses groups that are not the majority.