Dylan River races into official competition with his motor racing documentary Finke: There & Back 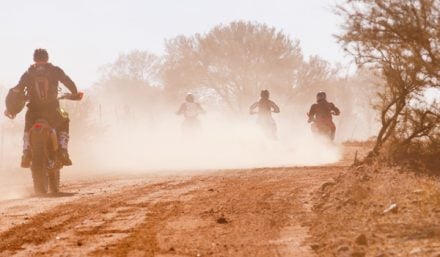 Finke: There and Back

The Finke Desert Race is the largest off-road motor race in the Southern Hemisphere, and Australia’s fastest and deadliest motor sport event. Director Dylan River (a competitor himself) explores the race from within: the contestants, organisers, paramedics, and the drive to win against the desert against all costs.

Finke: There & Back, follows the winners and losers of the toughest off-road motorsport event, the Fink Desert Race. Create NSW spoke with the film’s writer, cinematographer and director, Dylan River, to discuss what drove him to make this speedy documentary.

How does it feel to have your film screening in competition in the Documentary Australia Foundation Award for Australian Documentary at this year’s Sydney Film Festival?

It’s a huge privilege to premiere our film at this year’s Festival. Sydney is a second home to me. The Festival screened my first documentary and I’m excited to bring my second from the desert to eyes in the big city.

Finke: There & Back, follows the winners and losers of the toughest off-road motorsport event in Finke. How did you come across this event and have you competed in it before?

The Finke Desert Race has been in my blood since I was twelve years old. My father raced it a few times back then and I was hooked from the first time I saw a motorbike hurtling towards me through the desert with a helicopter skimming the tree tops about it. The competitors that raced were like superheros to me.

Naturally, I was lining up on the start line the first chance I got at sixteen years old. My aim was just to get there and back. After completing my first year I gave it a second crack with much improved results. On my third attempt I went for broke, landed on my head halfway to Finke, and was airlifted back to town in a helicopter. I guess that’s where the idea of a film started.

How was the experience of working on this film as writer, director and cinematographer?

Can you share with us how you develop the structure of this documentary, to make sure that it was contained into a manageable story?

It was with great difficulty that we crafted the film into the story it is. There have been multiple changes in lead characters with edits ranging anywhere from two to four hours. Like any documentary of this nature the story is written in the edit suite by subtracting everything that isn’t the story. We only got there with the assistance of great editors and guidance of feedback from people who watched the cuts along the way.

This end result really is a visually stunning documentary. Can you tell us about the kind of planning you did in pre-production to achieve this look?

The film may come across as visually stunning simply because of the photographic nature of the desert. As locals we often refer to it as ‘God’s country’. A huge part of covering our characters in the race was to use helicopters. This led to some pretty shots.