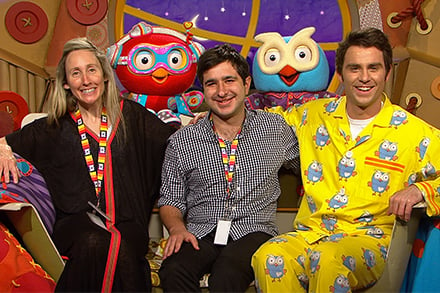 Joel Pragnell recently completed a Create NSW Createability Internship with ABC TV, where he is still employed. We caught up with Joel to hear about his experience learning the ropes (and edits) on Play School, The New Year: Early Night Show, and Giggle and Hoot.

Why did you decide to apply for the Createability Internship Program?

I needed support finding the first step to my career after graduating from university and studies at TAFE. Having Hydrocephalus can be frustrating because it’s such a broad condition with lots of minor effects. My hope with Createability was that I could gain the experience I needed in a workplace that was willing to listen, and that was suited to my skills.

Your internship was as an editor at the ABC. Can you tell us about your role and what a typical day was like for you?

The internship changed a lot over time. It started with editing for Play School, and also observing their production process working on ABC Kids. After a while I was also assisting with editing for Giggle and Hoot and the New Year’s Eve: The Early Night Show.

I had a lot of help with editing and encouragement from Nat Martin, Sophie Emtage, Bryson Hall, and Prasan De Silva when needed, so the transition in styles between the different shows and formats weren’t too much of a challenge.

What did you learn?

I learnt a lot about different editing styles, which varied between shows and formats, also great to learn more about how ABC Kids shows functioned in terms of production and the filming process. I was also tasked with cutting the opening sequence for the ABC New Year broadcast, which was challenging, but I had lots of fun working on it.

Has the experience given your ideas about your career path?

One of the most challenging parts about my career path is the need for experience before jobs. This internship has helped provide me with that experience and a chance to show my abilities as an editor. Createability has connected me with people who are understanding and encouraging and has given me confidence in my ability to get my career on track after years of uncertainty.

After you completed your Createability internship you were offered a position for eight weeks as a Production Assistant on the ABC’S Giggle and Hoot show. Can you tell us a bit about that and what you would like to do next?

I’m currently still in that role and it’s been extended. The internship was originally for eight weeks starting in July 2019, but I’ve been continuing in the role since then. I’d love to continue working with ABC Kids. Everyone has been extremely supportive and understanding over the last year.

Follow us on social media and on our Create enews and Screen enews to make sure you’re in the know.