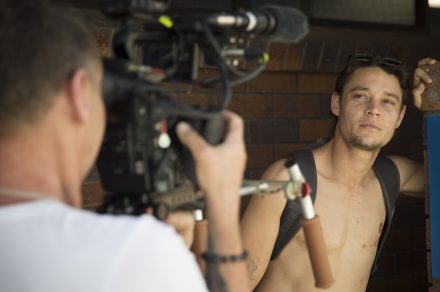 Behind the scenes on Transblack, produced by Mitch Stanley.

The Fund is open to short film proposals, of 5-15 min maximum duration with at least one, preferably two Aboriginal or Torres Strait Islander key creatives (writer, producer, director) attached. These short film proposals may include drama, factual, animation or experimental projects for broadcast, appealing to a wide audience.

On approval, up to six successful applicants will receive $30,000 in production funding to realise their ambition; $15,000 from Create NSW and a $15,000 licence fee from SBS. Producers will need to raise any additional finance they require.

Applicants are advised to read the eligibility guidelines before applying.

Applications must have at least one Aboriginal and Torres Strait Islander key creative (writer, producer, director).

The Applicant must have a valid ABN and, if required by law, be registered for GST.

The Applicant must hold the rights to the project.

A team must comprise of at least two members, and all teams must include a producer.

One person cannot be both the producer and director on the project. However, writer/director or writer/producer are eligible.

The key creative team may include only one person who has substantial previous professional (i.e. paid) film or television experience as a writer, director or producer.

Create NSW is committed to supporting increased participation in the industry of people from underrepresented groups including women, Aboriginal and Torres Strait Islander peoples, people from CaLD backgrounds, people with disability, LGBTQI people, people from western Sydney and people from regional NSW.

What project formats are eligible?

Create NSW is seeking projects with at least one of the three key creatives (writer, director, producer) who must identify as Aboriginal or Torres Strait Islander.

Please read these guidelines alongside the Create NSW Terms of Trade and SBS Codes of Practice and SBS Editorial Guidelines.

Preferably the project should be PRODUCTION READY at the time of application and must be capable of being delivered no later than Friday 31 May 2019. Principal Photography must commence no later than mid February 2019.

Please note: GEFF Projects cannot apply for nor receive funding from any other short film initiative or fund.

An individual can submit or be attached to multiple applications; however we’d advise you to put your most competitive projects forward.

Requests can be made for production and post-production costs only.

Grant monies cannot be used for retrospective funding or to purchase equipment.

Third-party investment is allowed under specific conditions and following consultation with Create NSW and SBS/NITV. Third-party investors must sit behind any deferrals in the recoupment structure.

Sponsorship and product placement may be allowed in the form of a grant, not an investment (it cannot be recoupable) but must be approved by SBS/NITV in advance.

How much can I apply for?

Create NSW will contribute $15,000 and the SBS licence fee is $15,000. Producers will need to raise any additional finance to make their films.

We encourage applicants to approach industry facilities and negotiate deals, as well as crowd funding, distribution and other sources of funds to finance their project that conform to the SBS’s published editorial policies and codes of practice.

How will my applications be assessed?

Create NSW and SBS/NITV will review and assess the applications against the following criteria:

Please refer to the Create NSW Terms of Trade.

Successful teams will have a briefing and liaise with the GEFF Executive Producer, a Production Company appointed by Create NSW and SBS/NITV.

At this point, we will discuss Create NSW and SBS requirements, provide feedback, and go over any questions you may have.

You will need to finalise and execute the Create NSW grant agreement and the SBS Presale Licence within 6 weeks from the date of the briefing, unless otherwise agreed.

If this does not occur, the decision to financially support the project may lapse.

Obligations to Create NSW will include the following:

A copy of our pro forma GEFF grant agreement can be found here.

If you have any queries about your application, please contact: