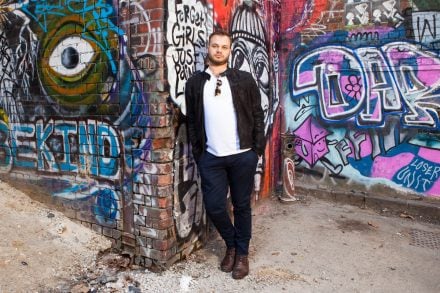 Sydney artist Travis De Vries has been announced as this year’s NSW Aboriginal Arts Fellow, completing the suite of 13 Fellows from Create NSW sharing over half a million dollars for self-directed programs of professional and personal development.

The NSW Aboriginal Arts Fellowship is one of five $50,000 Priority Fellowships offered each year in line with the priority areas highlighted as part of the 10-year NSW Arts and Cultural Policy Framework Create in NSW, with seven $30,000 artform focused Fellowships also supported through the funding.

Using his funding, Travis will research the Gamilaroi language and lore through a residency at the Australian Museum throughout 2018, using his findings to inform a major new work for an exhibition debuting in 2019 at the Muswellbrook Regional Arts Centre.

Travis De Vries has been a practicing artist since 2006, working across the mediums of painting, contemporary dance, choreography, music and writing. Travis trained in Fine Arts at Deakin University and in dance at NAISDA Dance College where he received the Chairman’s Award for Excellence. He was also a performer with Bangarra from 2010 to 2013, touring with the company on their national tours and international tours to New York and Mongolia. In visual arts he has been a finalist in the NSW Parliament Aboriginal Art Prize (2013, 2015) and a finalist in the Norville Art Prize (2014).

Create NSW CEO Michael Brealey commented, “Through careful research and experimentation, Travis is able to interpret Aboriginal culture, bringing it to life with a standout graphic style that appeals to both western and contemporary Indigenous audiences. He has a very interesting project ahead of him and we’re excited to see the works he will unveil in 2019.”

“We are passionate about supporting NSW’s Aboriginal artists and creating new opportunities for their growth and development across the state. We are delighted that Travis will follow past recipients such as author and arts leader Cathy Craigie and theatre producer and curator Andrea James in accepting this Fellowship.”