Brook Andrew taking Sydney to the edge with NIRIN 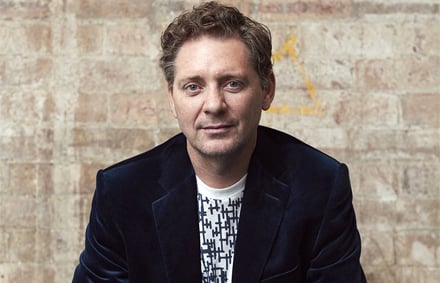 Artistic Director of the Biennale of Sydney, Brook Andrew. Image supplied by Biennale.

Artistic Director of the Biennale of Sydney, Brook Andrew, is set to challenge and change the cultural landscape of Australia. Ahead of his first Biennale, we spoke to Brook about this year’s program and the critical ideas around First Nations art, globalisation, capitalism, and taking the Biennale to new spaces in Sydney.

What does it mean to you to theme the Biennale with the word NIRIN, which means ‘edge’ in your mother’s language, Wiradjuri?

There’s been a lot of linguicide in the world over the last 500 years or more, especially during times of extreme colonialism, but there are language programs within Australia and other Indigenous cultures that are trying to revive language, which is of course, the foundation of culture. From ceremonies, to the way we eat, to the way we communicate, and all those nuances. It’s an important reminder of the complexity of how people see the world differently to often dominant ways of viewing the world, especially after the 2019 United Nations Year of Indigenous Languages.

This year’s program contains a great mix of First Nations practitioners from Australia and around the world. What are your thoughts on amplifying their voices and practices, and giving them a huge platform to control and tell their stories?

I didn’t really go out to say “okay, let’s make a First Nations Biennale”, because it’s not just a First Nations Biennale. It’s First Nations focused and a philosophical base through the seven different themes: DHAAGUN (Earth: Sovereignty and Working Together); BAGARAY-BANG (Healing); YIRAWY–DHURAY (Yam-Connection: Food); GURRAY (Transformation); MURIGUWAL GIILAND (Different Stories); NGAWAAL-GUYUNGAN (Powerful-Ideas: The Power of Objects); and BILA (River: Environment). It’s artist-led, it’s community-led, and a large philosophical edge from that Indigenous perspective. We have scientists, environmentalists and artists who are not Indigenous that really come together to bring a real strength.

There is a very strong First Nations focus, although it’s more about the quality of how we look at art practice and creativity more generally, across the globe. Europe and other major artistic western centres have a particular genre of art practice, which often inserts First Nations artists, South American artists, or artists from somewhere else as a token of representation. So, I’ve been very conscious to really balance it out to a global network and representation.

It’s also really important to reflect on the history of Biennales here or even big expositions of the 1800s, 1900s, where often human beings (Indigenous people and other people) are put on display, or their objects or bodies are put on display, and that’s quite a traumatic and sad history. What I’m trying to do is subvert that and say there’s a different way these people can be empowered to tell their stories about their bodies and their objects.

You mention the Biennale is not just First Nations; there’s also an intersection of art, science, food, with contributors including Kylie Kwong. Can you tell us about that?

It’s really about their own practice and how they connect to other artists and communities.

Kylie might be known as a famous chef, but she’s been having a grassroots collective with many other people, including Indigenous and non-Indigenous in regard to health, healing and innovation. She’s also working with artist collectives and individual creatives in the Biennale, led by three scientists they work with artists and other thinkers or makers to share the urgency of the impact of plastics on birds, sea and ocean animals. It’s a real urgency.

There is an urgency, we’ve all been seeing it on the news and some of us are touched more deeply. If we just look at asylum seekers or at the work of Turkish-based artist Erkan Özgen, Aziz Hazara from Afghanistan, Lhola Amira from South Africa, Rosana Paulino from Brazil, or Mayunkiki from Japan – these are all artists who are dealing with the coalface of their own practice and their own communities. These artists are also working on issues around healing or sovereignty and a lot of them are Indigenous and some of them aren’t.

There is a great divide in the world: those who have money or live in a so-called first world nation, and then those who maybe don’t have access to homelands or who are on the journey escaping war, or don’t have food or water quality.

One thing I’m interested in is, how do they create this social change, and how can art be an experience of power? It’s not just an aesthetic power, but a power that can relate to people in ways that, when they’re juxtaposed or put together, they can really bring out anxieties we’re feeling today or about positive futurism. It’s turning histories, identities, and stereotypes on their heads, but they’re also carving out new ways to relate to each other and possibly create a different kind of future. For example, there’s also a bit of comedy with First Dog on the Moon – the way that he often looks at difficult realities but he’s funny. The same with filmmaker Warwick Thornton, who’s making a film called Meth Kelly, looking at the history of Ned Kelly being a meth addict.

They’re collectives and creative collectives, and like any other creative collective in the Biennale. It makes sense that we tap into the existing and important network in Sydney and Greater Sydney, and even go broader and wider than that. The legacies of those sites are often invisible.

Blacktown Native Institution was the first site of removal of Aboriginal children, so that was the real frontier. That was originally recorded as Parramatta; then it was moved to Blacktown. So, the 250 years of ignorance and invisibility towards the plight to be Darug people is significant. If we look at the Stolen Generations and its legacy, that’s where it all started, and it has extreme impact on the way that we look at history, and the way in which we need to understand what that means for us today.

It’s the same for the Parramatta Female Factory and other sites like the Bankstown Poetry Slam. They’re important voices that talk about the complexity of histories, and they’re controversial because people don’t like to hear about journeys of coming to this land and that complexity. Australia’s not the perfect place – it’s beautiful but it’s as complicated as anywhere else.