Antarctic adventure provides Allen and Blackadder with the A-Factor 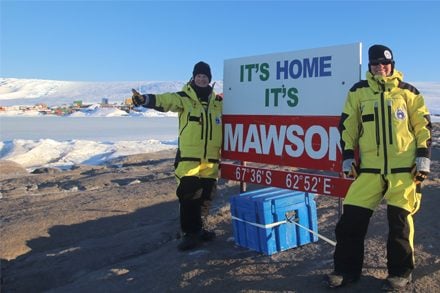 A 2018 Antarctic Arts Fellowship left writers Jane Allen and Dr Jesse Blackadder out in the cold at Mawson research station, to collaboratively research, devise and write a compelling new TV series and novel. Jane shared her experiences with us.

You’re aboard the Aurora Australis on the homeward leg of your Fellowship with Dr Jesse Blackadder for development of the new series A-Factor. What was immersion in an Antarctic community like?

I have lived at Mawson research station for the last three months. Being immersed in an Antarctic community has been extraordinary. We have lived and worked just as the other expeditioners do – expected to perform the same duties around the station. There is no ‘staff’ so everyone pitches in to do cleaning, rubbish collection and other maintenance jobs, and we’re trained in outdoor survival in the same way. We have gone on working field trips, and field trips for weekends ‘off’, and been part of all the special occasions celebrated on station.

For much of our time in Antarctica it was 24-hour light that took a bit of getting used to. We also became as obsessed with the weather as everyone else. The temperature, the wind and the chill are an important part of everyday life.

Your three-month trip to Antarctica was a means to delve into the daily life of expeditioners at the research station. How’s the writing process going now, particularly on your homeward voyage?

Jesse Blackadder and I were given our own office space at the station and worked the same hours as everyone else. We had two projects – writing a novel for 8 to 12-year-olds and developing a TV series. As Jesse is the published author of nine novels she led the novel writing process and I led the TV one. This way we each got to learn another way of working. For both projects we used the tried and true method of covering the walls with different coloured index cards, full of notes on plot and character. We completed the second draft of the novel during our first week back on board the Aurora Australis and have now completed the bible for our TV series.

What was it like at Mawson Station? Were you ever able to take your socks off?

The living quarters at Mawson were well heated but not overheated. Some could live in t-shirts and others, like me, needed to wear jumpers. We all had to take our work boots off at the door, which meant we did many things like eating meals, watching movies and drinking at the bar in socks. Most of the time the socks were all the same, the ones we had been issued by the Antarctic division, which made things interesting when hanging up your washing in the communal drying room.

The fellowship was a truly incredible experience. I lived and worked alongside a great bunch of people and saw and did things I never expected I would. Our complete immersion in the world of the station has given the work we have developed a level of authenticity and detail that would never have been possible to find any other way. The hardest thing about the whole experience is leaving Antarctica.

More information on the fund: https://www.create.nsw.gov.au/wp-content/uploads/2018/10/Antarctic-drama-brought-to-life-on-the-small-screen-media-release.pdf