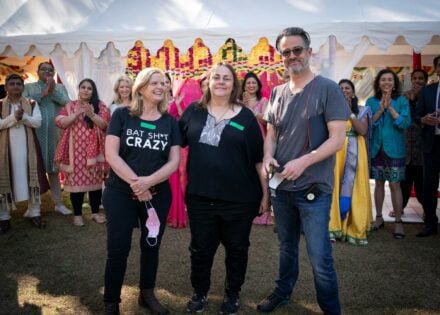 Creators and showrunners of the ABC’s dramedy Wakefield, Kristen Dunphy and Sam Meikle, discuss how they brought to life this unique series and what they hope audiences will take away from its story.

Kristen, the concept for Wakefield is based on your own mental health struggles and your experience as a patient in a psychiatric hospital. How did writing about your lived experience impact you?

KD: In some ways it felt very exposing, because it was so personal. It was also confronting in the sense that because of the stigma attached to mental illness, I was fearful that in revealing my own experience, I might be judged and perhaps even jeopardise future work. It was also very freeing for me in the sense that I was able to turn something devastating into something creative and entertaining. I was able to communicate some of the experience of people like myself who have suffered mental illness and hopefully bring others to a better understanding of what it’s like.

You have previously worked on screen projects together. Sam, what attracted you to this project?

SM: There’s a strong history of mental health issues throughout my family, so I had a lot of experience from a different perspective, and an immediate affinity for the subject matter. Like Kristen, I was eager to help bring hope and understanding to the broader community.

More than anything though, when Kristen sent me the bible she’d been working on for the show, the potential for entertainment was apparent – along with the creative challenge – and the combination was hugely attractive.

Each episode of Wakefield is presented from a different character’s perspective and blends non-linear narrative, fantasy, music and dance. What inspired you to tell your story in this format?

We wanted to get inside the minds of our characters and allow the audience to feel what it’s like to walk in their shoes. Fantasy, dreams and altered states were all used as a way of telling a character’s story in an intimate way. The reason we often looped back in time to show the same moment from another person’s point of view was because we wanted to explore the idea that you never really know what’s going on in someone’s head or the effect your behaviour is having on someone else. We called this ‘the ripple effect’. The use of music and dance in Wakefield was designed to lift the audience out of a particular moment and see it from a different – and often humorous perspective. It’s a way of providing relief from what can sometimes be quite dark material. Our use of a non-linear style was borne from the subject matter. Mental illness is like a puzzle. It takes time to build a picture of what’s wrong and how to treat it. The whole series is a bit like a puzzle. The audience can enjoy putting the pieces together along the way, but they won’t be able to see the full picture until the final piece is in place.

You not only co-wrote Wakefield, you are also the showrunners and executive producers of the series. What did you learn from this experience and has it made you both want to take on these types of roles in the future?

What we learnt from our experience as show runners and EPs on the series was how important it is to see a creative vision through to the end, particularly with a highly authored work like Wakefield. We made a decision very early that the only way to ensure the success of this very ambitious series was to work collaboratively with a team and at the same time, maintain creative control across the series – from pre, production, post, right through to publicity and marketing.  The showrunner is able to take a macro view of the series, while the director must focus on the specific.

It’s easy to let the financial and scheduling constraints begin to drive the creative, but we have to fight against that as best we can. We can do this by opening up new financing routes, by exploring new modes of production and by accepting that with the writers at the centre of that process the show will always have options.

With writers at the centre, you can pivot, you can reinvent key moments where necessary. Knowing what you can compromise on and what you can’t from a storytelling perspective ensures that the show doesn’t shoot itself in the foot. We believe that the resulting cohesion and strength of vision delivers on the ambition of Australian storytelling and will help our shows continue to compete on the world stage.

Having been at the forefront of Wakefield, it would be hard not to take that approach into what we do going forward. Showrunning Wakefield was everything you’d expect – challenging, scary, thrilling and ultimately very fulfilling. Getting a deeper understanding of the financing, budgeting and scheduling aspects of a show as producers – relishing the relationships we were privileged to have with our team – has made us better writers.

Wakefield was first released on ABC iview followed by ABC TV on 18 April 2021. The way in which content is being consumed has changed, does this impact your artistic process?

When we were creating Wakefield, we didn’t know it would be released on iview before it was released on free to air. However, we were very mindful of the sophistication of modern audiences who watch a large amount of imported content via subscription video on demand and whose viewing habits have been turning towards ‘bingeable’ series. This was all in line with what we were aiming for with Wakefield; storytelling that doesn’t spoon-feed but instead allows audiences to piece together narrative threads and engage with the show.

It also allows writers and storytellers more flexibility in the way we tell our stories. Traditionally, you would often write to commercial breaks that would in its own way dictate structure and rhythm. Streaming and bingeing free you of some of those constraints, opening up options to explore the creative in different ways.

You were also given the opportunity to develop two initiatives aimed at raising awareness around mental health. The initiatives are called Tap Into Mental Health and Stand Up for Mental Health, can you tell us a bit about them and what the response has been?

The intention with both initiatives was to use the show to generate broader conversations and to engage with the audience we have beyond the span of the show. There’s no denying that the subject matter is complex – and for some, triggering. As mentioned, we also wanted to make a positive contribution to the greater community dialogue around mental health. So many modes of engagement with your audience are now available, we felt there was a fantastic opportunity to take the conversation to another level.

Tap Into Mental Health is a social impact campaign that offers the audience ways to connect with their mental health. There’s lots of ways to get involved – including learning an easy tap dance (from the Wakefield Choreographer, Chris Horsey) that we hope will put the conversation we’re trying to progress on a positive and productive footing – pardon the pun! Take a look at the hashtag #TapIntoMentalHealth for some examples of how you can get involved, or see all the resources at tapintomentalhealth.com

Stand Up For Mental Health was an event we filmed during production, where some of the creatives, along with mental health ambassadors and mental health professionals, came together to reflect on their own lived-experience for a live audience. Out of that, we created a web series and an iview special that we hope will reach the audience between the broadcasts of the episodes. See them all here: https://iview.abc.net.au/show/stand-up-for-mental-health

What do you hope audiences will take away from watching Wakefield?

First and foremost, we hope that audiences will be entertained by the series. We hope they will laugh, cry and be pulled along by the intrigue of the psychological mystery that drives it.  Along the way, we hope that Wakefield will increase people’s understanding of what it’s like to have a mental illness and go some way to normalising strong emotion. Because ultimately, it’s not an ‘us and them’ situation with mental health. We are all on a spectrum. We are all vulnerable.

Watch Stand Up for Mental Health

Learn more about the initiative Tap into Mental Health