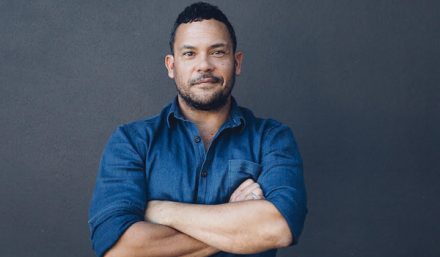 Kirk Page Associate Director of Northern Rivers Performing Arts, a screen practitioner, theatre maker, movement consultant, choreographer and director. Create NSW spoke to the former Bangarra dancer and award-winning Redfern Now star about his work and about how he will be observing National Reconciliation Week.

You’ve had an impressive 20-year career in the arts, working across many artforms including film, television, theatre and as a movement consultant, choreographer, director and as Associate Director of Northern Rivers Performing Arts (NORPA).  What is it that interests you in working across these different artforms?

My interest is in storytelling in all its forms and disciplines. Not all storytellers have the privilege of developing their voices in a university or school. I think the arts is for everyone and I’m especially interested in stories of the everyday person. I like the freedom I get from having options, whether it’s creating movement for actors, or embodying a role for the stage or screen. I have a few options that give me freedom in my expression – real or abstract. Sometimes moving says something that words can’t and vice versa, and it’s thrilling to have that knowledge and the courage to create in these forms.

Through your work at NORPA as Artistic Director, have you seen the organisation develop?

I have seen the company open its doors to the local community, the local artists and also to develop its storytelling through strong physicality, taking risks in investing in the community. The associate artist program is exciting as it brings new energy into the building and supports the vision of Artistic Director, Julian Louis. I have also brokered two partnerships with Beyond Empathy, for regional Aboriginal-focused art making, and also a partnership with Critical Path, choreographic centre in Sydney.

During the span of your career have you seen the representation of Indigenious stories change?

Slightly. There is still a lot of work to be done in developing these stories and allowing the proper time to be birthed. Programming in this country needs to shift and the fear of the work not being of a certain ‘level’ needs to be transformed.

What else do you think need to change to improve?

There needs to be more First Nations artists being employed in theatre companies and building more rigour around diversity in the work place. It’s currently being talked about, but I believe the white patriarchy needs to sit back and make space for a new wave.

Can you tell us about what you are working on at the moment?

I’m currently working in Pontianak, Indonesia with one of NORPA’s associate artists Jade Dewi, performing at the Gawai Festival of First Nations people of Indonesia. We are also delivering workshops and having exchanges with some of the local Dayak people, developing and researching ideas around smoke form, looking at themes of smoke in ceremony in First Nations Indonesia and First Nations Australian people. We are also in very early stages of development looking at the effect of smoke in Borneo and the tobacco trade and its health implications.

I am also programming a small NAIDOC celebration event for NORPA. I assist with programming choices and researching shows for our 2019 program. I’m also going into creative development on a project called Horses Mouth in Partnership with Beyond Empathy. NORPA will begin a choreographic exchange this month, which I will be participating in. I’m essentially producing, programming, directing and performing in the company’s works and I will also be developing other projects with community and other mid-career artists.

What does National Reconciliation Week mean to you?

For me, it’s an opportunity to listen and respect, take the chance to reflect on our history and ask what kind of nation we are, and how do we deal with our collective history in an authentic way.

How will you be observing it this year?

I will attend the celebration lunch at Southern Cross University in Lismore and I will continue to create spaces for our Aboriginal and Torres Strait Islander youth and leaders for tomorrow, through my art practice, and creating.